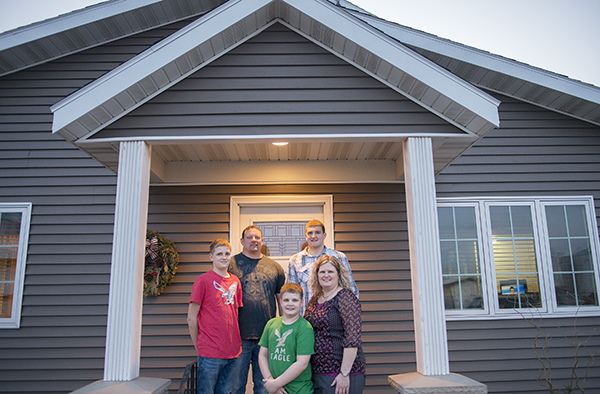 The Steele family out of Alden has been named the 2016 Farm Family of the Year. – Colleen Harrison/Albert Lea Tribune

ALDEN — The Steele family of Alden has been selected as the 2016 Farm Family of the Year.

Doug and Stacy Steele — along with their three sons, Gavin, 15; Garrick, 13; and Garrison, 10 — live on a farm of about 800 acres. The farm grows soybeans and corn, and is also home to about 10,000 pigs per year that the Steeles raise from wean to finish year-round.

Doug Steele said he buys his pigs young, when they weigh about 14 pounds, from Precision Pork about every eight weeks. Precision Pork is a sow co-operative that the Steeles part-own with three other families, and Doug Steele said it is about five miles away from their farm in Alden. The Steeles sell the pigs after about 5 1/2 months, when they weigh about 275 to 280 pounds.

Doug and Stacy Steele have been married for over 20 years and are both originally from the Alden area. Stacy Steele grew up living on a farm with her family, and Doug Steele is a fifth-generation farmer. He grew up farming with his father and his uncle. Today, Doug Steele still works with his father, Richard Steele, as well as his brother-in-law, Dustin Jacobs, on their properties as well as his own. All together, the three farms cover about 3,000 acres, he said.

Since he was younger, Doug Steele said he has always wanted to work on a farm, and he enjoys the aspect of being his own boss. He started out helping on his family’s farm as a teenager, and continued working for his family part-time around majoring in swine production at the University of Minnesota, Waseca.

Doug Steele farms full time, while Stacy Steele works at Mayo Clinic Health System in Albert Lea in release of information. The couple has owned their farm in Alden for about 21 years.

Along with farming full time, Doug Steele is in his second year of being on the Alden-Conger School Board. He was also a past president of the Mansfield Lutheran Church council, where his family worships. As a hobby he enjoys collecting 1950s and ’60s Chevy pickup trucks.

On top of working for Mayo Clinic Health System in Albert Lea and helping on the farm, Stacy Steele is a Sunday school teacher at the family’s church, and is also a co-leader of the Conger 4-H Club, through which the couple’s sons have shown pigs over the years.

Doug and Stacy Steele’s sons have started helping with farm work and chores more and more as they get older, and Gavin Steele has started taking agronomy classes. He said he has become more and more interested in farm management and the business side of farming.

The Steeles said they don’t know who nominated them for the award, but they are appreciative of the nomination.

“A lot of really good families have gotten (the award) in the past,” Doug Steele said. “We feel pretty honored.”

To be nominated as the Farm Family of the Year, at least one individual in the family must be a full-time employee earning the majority of their income from farming. The individual should have farmed for at least five years, have some involvement in community organizations, have not previously been an award recipient and should be able to attend the recognition program at Farmfest in August and participate in Freeborn County Farm Family of the Year recognition in March. The Albert Lea-Freeborn County Chamber of Commerce Agriculture Committee and the University of Minnesota Extension Service sponsor the award.