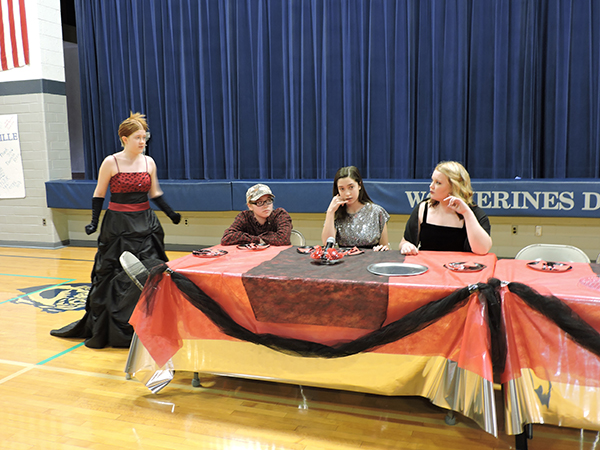 Performances are at 6 p.m. Friday and 11 a.m. Saturday in the school gym.

The presentation of “Cafe Murder” will feature high school members of the drama club in a murder mystery in which the audience will get the opportunity to guess “who done it.”

The play centers around a character named Rosemary and her four sisters who have decided to go to a small bistro to celebrate Rosemary’s birthday; however, not everything runs as smoothly as Rosemary would like.

The cast also includes a waiter, wait staff and the maitre’d who leads the audience through the mystery, as well as Harris the detective, a self-taught sleuth.

According to Christine Wik, art teacher and drama club adviser, the students are doing great in what will be the first drama production in years and what could possibly be the school’s first dinner theater.

“It’s going to be a lot of fun,” Wik said, noting the play is hilarious.

While it’s too late to purchase ticets for both the play and the dessert, those wishing to simply watch the production can buy tickets at the door for $5 each.

In addition to dessert, those who have purchased their tickets before last Friday will have the opportunity to ask the cast questions before voting on which character they think murdered the victim. Prizes will be awarded to who gets it right.