Father and son hike to raise funds for children 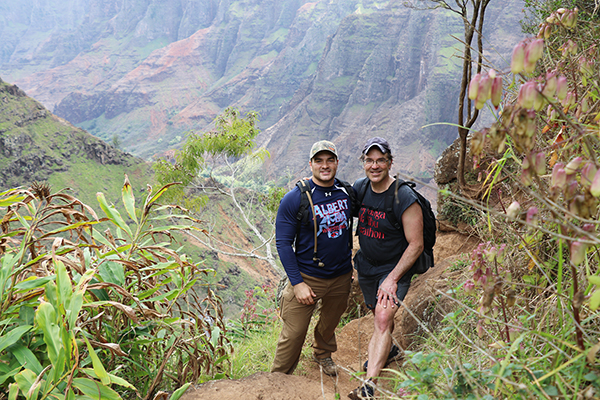 Bryce and Caleb Gaudian are pictured near Waimea Canyon in Kauai, Hawaii, while hiking a seven-mile section of Ultra-Hike No. 3’s 42 miles. – Provided

Caleb Gaudian, a 2011 Albert Lea High School graduate, has been serving in the U.S. Coast Guard in Oahu, Hawaii, for the past year and a half. 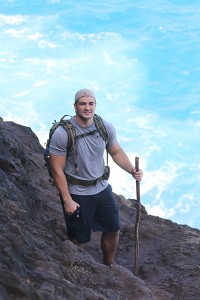 Caleb Gaudian is pictured on Crawler’s Ledge on the Kalalau Trail along the Na Pali coast in Kauai, Hawaii, while on Ultra-Hike No. 3 with his father during the 25-mile section of the hike’s 42 miles. Caleb Gaudian is serving in the U.S. Coast Guard in Oahu, Hawaii. – Provided

Caleb Gaudian flew to the island of Kauai to meet up with his parents Bryce and Cindy Gaudian of Hayward in early February. While on the island, Bryce and Caleb Gaudian hiked 42 miles on the Na Pali coast. Bryce Gaudian was doing his third Ultra-Hike fundraising effort to raise money for Hill Country Youth Ranch and Big Springs Ranch for Children in Texas.

The Christian ranches restore and redeem the lives of children who have been rescued out of abuse, abandonment and severe trauma, according to a press release. Ultra-Hike No. 3 had a fundraising goal of $34,000 to cover three projects: a 50-seat set of bleachers for the outdoor track and cross country course, air conditioning in the gymnasium at Big Springs Ranch for Children and bike racks for the 16 children’s homes spread between both ranches.

For the venue, the Kalalau Trail was chosen for 25 of the miles.   The Kalalau Trail follows the Na Pali coast, and is ranked as one of the Top 20 Most Dangerous Trails on the planet, according to Bryce Gaudian. Besides being dangerous, it is epic in beauty, the Gaudians said.

Having left cold Minnesota, the 105-degree temperature difference was very welcome, they said, although it lent itself to heat exhaustion worries due to profuse sweating, fatigue and the challenges of the trail.

Bryce Gaudian said the temperature made the island a perfect venue for raising money toward air conditioning for a  Texas gymnasium where active children and youth participate in volleyball, basketball and other activities, and where fans are in the stands up to six months of the year. 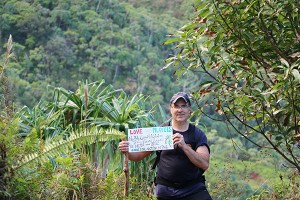 Bryce Gaudian is pictured in the jungle along the Kalalau Trail on the Na Pali coast in Kauai, Hawaii, while on Ultra-Hike No. 3 to raise money for Big Springs Ranch for Children and Hill Country Youth Ranch in Texas. – Provided

At press time, the Ultra-Hike No. 3 fundraising goal had been exceeded. Over $48,000 has come in, according to the Gaudians.

Ultra-Hike No. 2 was in September 2015 in Sequoia National Park and the Mohave Desert, covering 45 miles and raising over $72,000 for nine projects at the ranches.

The total amount raised through Bryce Gaudian’s three Ultra-Hikes is now over $173,000, and he said 16 specific projects or enhancements have been accomplished on both ranches.

He said over 1,000 people from across the U.S. and from overseas have sent donations, coming alongside Bryce Gaudian’s efforts for the children and youth being cared for at the centers.