Fed. financial safety net may not catch some Minn. farmers 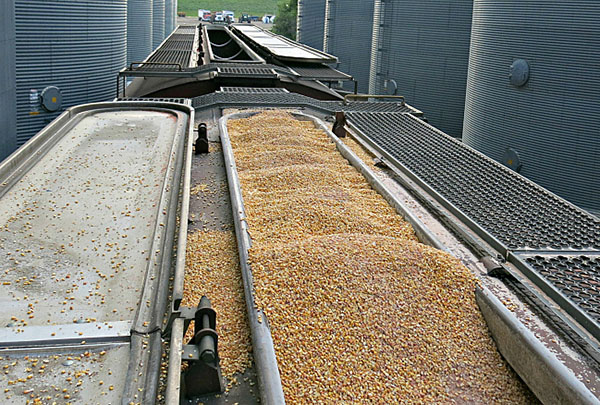 A rail car loaded with corn sits on a rail siding in Dilworth. If corn prices stay as low as estimates suggest this season, some Minnesota corn farmers may find they signed up for the wrong federal farm subsidy program — which may cost them dearly. – Dan Gunderson/MPR News

Warning bells have been sounding for the past year: Growing grain right now is a money-losing business.

The per-bushel price being offered for corn is at least $1 below what farmers need to make a profit. This is when the federal subsidy safety net is supposed to kick in and catch stressed farms before they start a financial free fall.

But for some Minnesota farmers, that safety net has some big holes in it, and that’s going to result in sharp differences in federal payments to corn farmers for their 2015 crop.

The arcane system of crop subsidies could produce a scenario where farmers in some counties get a substantial payment for last year’s crop, while neighbors across the county line end up with nothing.

What makes the payment scenario especially painful is that farmers choose to enter the Agriculture Risk Coverage, or ARC, program. The other option was a plan specifically designed for low grain prices that may ultimately do more for farmers over the five-year life of the farm bill.

More than 90 percent of qualifying farmers picked ARC, many believing it would pay more than the alternative.

ARC payments are calculated on a county-by-county basis. Areas likely to get nothing include major corn growing regions like Nicollet, Lyon, Pipestone and Stearns counties.

“It’s all over the board. In the southern third of the state you go all the way from zero to $84 an acre,” said Kent Thiesse, a farm management analyst at MinnStar Bank in the southern Minnesota town of Madelia.

Farmers getting nothing can only wish they were receiving the big money, he added. “That can be the difference from just barely breaking even or showing a loss to having a profit.”

The program’s payment formula accounts for the differences. Yield is the most important variable in the calculation.

The bigger the difference between the 2015 yield and the five-year average, the smaller the payment. That’s because the program assumes an above average yield means a big profit, and less need for federal support.

But corn prices are so low that even farmers with great crops will struggle to make money.

“I’ve been concerned about the ARC system from the start,” said Minnesota 7th District DFL U.S. Rep. Collin Peterson, who helped write the 2014 farm bill, which included the ARC program.

“When prices are down or going down, it offers less protection, which puts people in a position of not having the help when they need it,” he said.

If grain prices stay as low as forecast, more farmers may be facing low payments over the final three years of the program, he said.”The ARC system next year is going to be significantly less than it is this year.”

There doesn’t seem to be any chance that the program can be tweaked to even out payments to farmers in different counties.

While some minor adjustments have been done, no big changes are in the works, said Mike Schmidt, associate administrator for policy and programs in the Farm Service Agency, a unit of the United States Department of Agriculture.

“The formulas and process are pretty prescriptive in the statute,” said Schmidt. “It would take reopening the farm bill to make major changes.”

Reopening the farm bill would mean that all parts of the massive piece of legislation could be subject to change. Several members of the House, including Peterson, said there’s no chance Congress will do that.