Finding success on the green 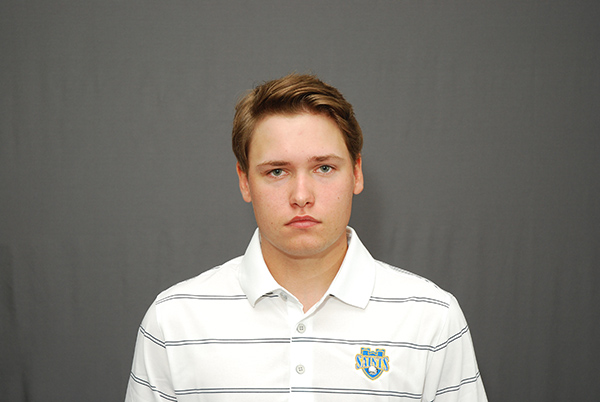 A new golf program has allowed Brent Nafzger to carry his game into college.

Nafzger said he didn’t think he would extend his career into college, but St. Scholastica head coach Eric Anderson said Nafzger expressed interest in the program even before Anderson was named to the position in June. Nafzger attended a tryout and is one of nine, including four freshmen, on the team.

In seven fall events, Nafzger had a 86.56 scoring average, fifth on the team and second-best among the freshmen.

For the most part, he was the fourth or fifth scorer for the team during the fall. His best finish was a sixth place — his lone top-10 effort — during the first tournament, where he tied for third among the Saints.

He was the team’s low scorer at the University of Northwestern Invitational in September, tying for 11th overall.

“He hits it very long,” he said. “Physically he’s not as big, but he’s got good pound-for-pound distance.”

Nafzger has been prone to miss-hit off the tee, however.

“Whenever it’s on, it’s very good,” the coach said. “If his timing is off, he can either miss left or right.”

He has been tweaking his swing for club face control, so that he achieves a consistent ball flight.

“I’m trying to get my hands back on the right path and square up the club face on impact,” Nafzger said.

He said he had not played any of the courses on the schedule. Though their length wasn’t different from the ones he has played, the playing surface was different.

The greens on the home course “all slope toward Lake Superior,” he said. “It’s hard to learn that.”

Fortunately, he has the composure to adjust, his coach said.

“You can’t tell if he’s having a good or bad round,” Anderson said. “That is his biggest opportunity to lower his scores.”

Send updates about area athletes to Barbara Boxleitner at bboxleitner@outlook.com.