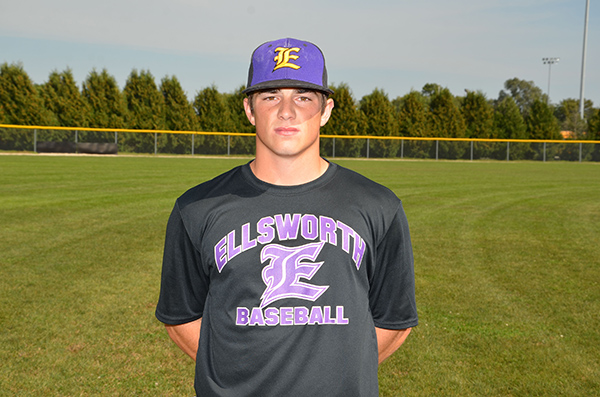 Johnathan Fleek has been a constant for the Ellsworth Community College baseball team.

The sophomore shortstop out of Albert Lea High School is a two-year starter. Through 15 games, he hit a team-high .411 average with two home runs and 11 RBIs.

He was recognized as the Iowa Community College Athletic Conference Player of the Week for Feb. 22-28. He was 8-15 with one home run and five RBIs. He added two stolen bases.

“He’s really put a lot of time and effort into getting better,” Ellsworth baseball coach Travis Akre said from Arizona during the team’s recent swing there. “He’s been a pretty well-rounded player.”

Fleek hit .326 with one home run and 24 RBIs in 50 games as the first or second batter in the order last year. This season he is hitting from the third spot, typically reserved for run producers. The new spot required him to alter his approach.

“Usually your bigger hitters don’t see that many fastballs,” Fleek said. ‘There’s more offspeed. I’m letting the offspeed go and hoping I get a fastball.”

He started a seven-game hitting streak — which included three consecutive multi-hit efforts — the second day of the season. He has the team’s highest on-base percentage and second highest slugging percentage.

“He has a very good approach and a good knowledge of all game situations,” Akre said. “He really competes with quality at-bats.

“He has probably one of our better baseball IQ minds,” he said.

Of the 11 games in which Fleek had gotten a hit, seven were for multiple hits. Five times he had gotten three hits.

“Just staying with my approach,” he said, “not trying to do too much. Stay (hit) up the middle.”

He anchors the defense as well, for Akre said he has good range and a strong, accurate arm. Fleek had a .937 fielding percentage in a team-high 63 chances.

“He consistently makes plays all over the diamond,” his coach said.

Fleek has verbally committed to continue his career at Western Illinois University, where he has been recruited as a shortstop. He said he will sign in April.

This summer, he said he plans to play for the Joplin (Missouri) Outlaws of the MINK Baseball League, which features teams from Missouri, Iowa, Nebraska and Kansas.

You can send updates about area athletes to Barbara Boxleitner at bboxleitner@outlook.com.