Sabo died Sunday morning at Abbott Northwestern Hospital in Minneapolis, according to his daughter, Karin Mantor. She said her father, a longtime smoker who was on oxygen, had been hospitalized for a week because he was having trouble breathing. Doctors discovered Sabo had a mild case of pneumonia, Mantor said, but the cause of death was not immediately known. 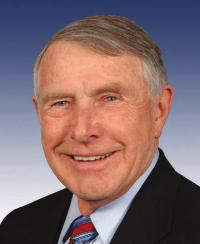 Sabo served 28 years in the U.S. House, easily winning each re-election after his first win in 1978 and eventually rising to House Budget Committee chairman. The Minneapolis Democrat announced his retirement in 2006 and was succeeded by fellow Democrat Keith Ellison, the first Muslim elected to the House.

Politicians praised Sabo, a Norwegian Lutheran, for his understated manner and ability to deliver millions of dollars to the Twin Cities for road and housing projects, including the Hiawatha Avenue light-rail line and the Minneapolis Veterans Medical Center. The Martin Olav Sabo Bridge, a 215-foot-long suspension bridge for bicyclists and pedestrians in Minneapolis, is named in his honor.

House Minority Leader Nancy Pelosi said Sabo “was the embodiment of good sense, legislative leadership, and lifelong service to our country.” She cited his work as budget committee chairman in helping forge the 1993 deficit reduction agreement.

U.S. Sen. Amy Klobuchar, D-Minn., recalled Sabo agreeing to do joint lawn signs with her when she first ran for Hennepin County attorney.

“He was a veteran congressman and I was a political rookie, but he didn’t hesitate to help. He saw it as part of his job to help young people get started in politics,” Klobuchar said in a statement.

Before being elected to Congress, the North Dakota native served 18 years in the Minnesota Legislature, where he was first elected in 1960 at age 22 and rose to House minority leader, and then speaker.

“Sabo’s quiet leadership style and dedication to his district are a true inspiration. He showed us the progress that can be made when Democrats and Republicans work across the aisle for the common good,” Minnesota DFL Chairman Ken Martin said in a statement.

In announcing his retirement after a 46-year political career, Sabo called putting together the 1993 federal budget as House Budget Committee chairman one of his proudest accomplishments. He also cited the so-called Minnesota Miracle — the 1971 Legislature’s groundbreaking overhaul of the state’s school funding system — as a major success.