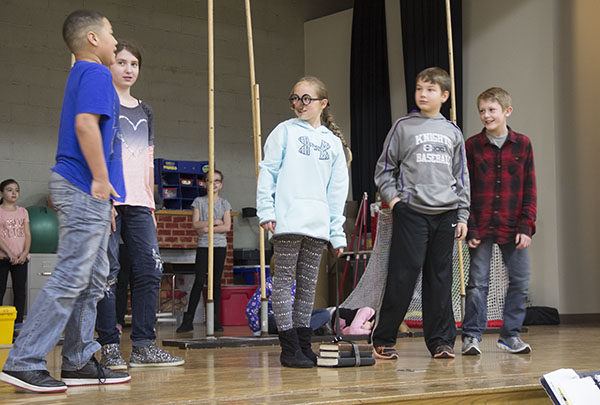 Hawthorne Elementary School students, including Sophia Brownlee, center, as Pinocchio, practice their production Wednesday afternoon at the school. After one week of practicing their parts and rehearsing, the students will present the play on Friday. – Sarah Stultz/Albert Lea Tribune

In less than a week’s span, Hawthorne Elementary School students have run the gamut of preparing for a play.

Two actors and directors from Prairie Fire Children’s Theatre came to the school Monday afternoon to begin auditions for “Pinocchio,” and after multiple-hour rehearsals after school each day this week, the students will present the play at 6:30 p.m. Friday. Students in third through fifth grades are participating. 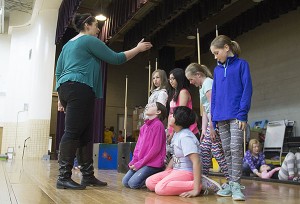 Prairie Fire Children’s Theatre is a professional touring theater company based in Barrett and has traveled to communities across the Midwest since 1987. The theater group works mostly in Minnesota, but has also worked in states such as Indiana and North Dakota.

This is the first time for the group to come to Hawthorne Elementary School, though it has previously been to other schools in the district, said Thomas Squires, Prairie Fire Children’s Theatre actor and director.

Squires said most of the Hawthorne cast has never participated in Prairie Fire Children’s Theatre or any other type of theater production.

He said he was impressed with the Hawthorne students and how easily they are picking up their parts. The company does this show in a new town every week, and he always likes to see how the students make it their own.

“It’s really about the kids,” Squires said. “They come out and work on this.”

Forty-two students are involved in the Hawthorne Elementary School play, whether it’s through acting, sound or lights. Leading the play as the character of Pinocchio is Sophia Brownlee.

Squires and fellow actor and director Deidre Cochran also have parts in the performance. Squires will be Geppetto and Tempesto, and Cochran will be Fox.

Squires said the play is based more on the original version, but is still similar to the Disney version that most people are familiar with.

Danielle Nelson, building clerk at the school, said the experience was funded by school district administration and a grant from the foundation for Mayo Clinic Health System in Albert Lea that Principal Karen Zwolenski applied for. 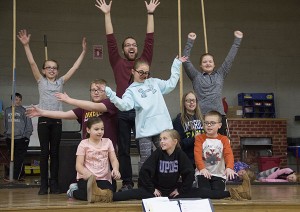 She said the students are excited in the hallways talking about their upcoming play.

Nelson and school Secretary Darci Rasmussen said they are impressed the theater group has parts for all types of children, whether they are outgoing or shy.