‘In the blink of an eye, your world can change just like that’ 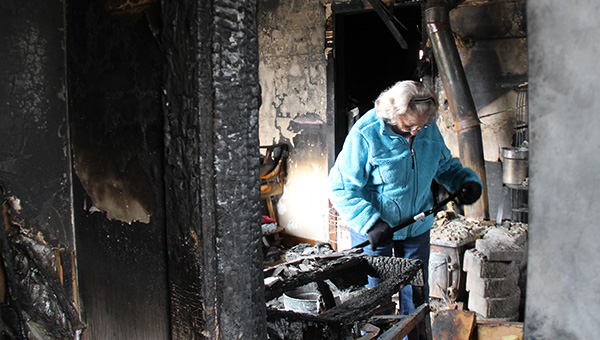 Owner of A.L. house destroyed by fire has seen one tragedy after another

Albert Lean Angie Nelson and two of her friends hadn’t planned to return to her home on Bridge Avenue mid-Friday morning, but because they did, they were at the right place at the right time to potentially save a life. 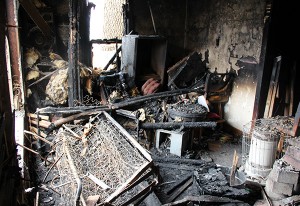 Charred remains sit inside a home at 803 Bridge Ave. in Albert Lea that was destroyed by fire last week. — Sarah Stultz/Albert Lea Tribune

Nelson said she and two of her friends had just finished volunteering at a food and clothing pantry at Albert Lea Vineyard Church and were getting ready to go to lunch.

Nelson said she needed to take her medication, so they stopped at her house at 805 Bridge Ave. a few minutes before 10:30 a.m.

“We weren’t even supposed to be there,” she said.

After coming back outside, they went to get into her truck to drive away, and her friend Andrea Samuelson said she noticed smoke coming from a neighboring house and commented that she thought something was on fire.

“I looked and I said, ‘Oh my gosh, I see flames,'” Nelson said about the smaller house set back behind the main house at 803 Bridge Ave.

She said she called 911, Samuelson moved her car and their other friend, Elaina Steele, went to help remove the home’s occupant, Jacqueline Baker, who was going in and out of the house trying to salvage her belongings.

Nelson said she went over and tried to help Steele, and together they walked Baker away from the house to Nelson’s front steps. 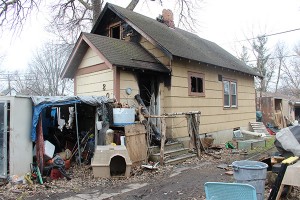 A handful of gasoline gans and other propane tanks were nearby a house that was destroyed by fire last week in Albert Lea. — Sarah Stultz/Albert Lea Tribune

“She was very in shock and was almost hyperventilating,” Nelson said, noting that Baker’s face, lips and hands were blackened with soot.

Both Baker and Steele were treated for smoke inhalation.

“It was scary,” Nelson said. “It really hits home when you’re right there helping somebody with such a tragedy.”

Officials plan to release more information about fire this week

Gloria Lashbrook, owner of both homes at 803 Bridge Ave. since 1997, said she had left her house with a friend a little less than a half hour before the fire was reported to authorities. She received a call from her granddaughter that the house was on fire.

“I thought, ‘My God, it can’t be,'” Lashbrook said. “We just lost a house last night. How could we lose another one this morning?”

The night before — a little more than 12 hours before the Bridge Avenue fire — her son Christopher’s home was destroyed by fire in Beardstown, Illinois.

According to the Jacksonville Journal-Courier in west central Illinois, the second floor of that house was engulfed in flames when firefighters arrived, and her son escaped uninjured. The cause of that fire had not been released in the newspaper, but Lashbrook said she heard it started from an electrical failure. 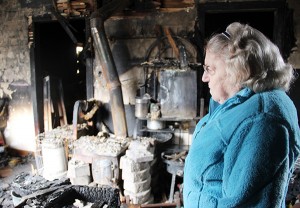 Gloria Lashbrook looks out over the damage from a fire last week that destroyed a house at 803 Bridge Ave. — Sarah Stultz/Albert Lea Tribune

Baker — her son’s former girlfriend — had been living in the Albert Lea house set back from the main house for a few weeks. There were no utilities or electricity going to the house.

Though an official cause of the Albert Lea fire has not been released, Lashbrook said she thinks the fire started from an electric heat lamp that Baker had with her on the couch that day while she was sleeping. She had used an extension cord from the front house to provide electricity to the lamp in the back house.

Lashbrook said Baker was staying in her basement, but she declined to talk with the Tribune.

Albert Lea Deputy Fire Chief Jeffery Laskowske said more information is expected to be released Thursday about the cause of the blaze. The State Fire Marshal’s Office and Albert Lea Fire Department have investigated. 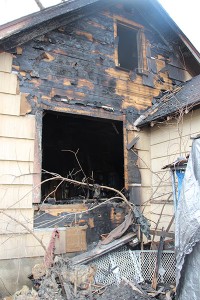 Lashbrook said she thinks the fire started behind this window from an electric heater. — Sarah Stultz/Albert Lea Tribune

Lashbrook said her life has been one filled with tragedy in the last few months. She said her husband, Allen, died in December after falling into a fire pit.

“In the blink of an eye, your world can change just like that,” she said.

City staff have worked with Lashbrook to clean up refuse around her property for the last few years, and now with the added stress of the fire she said she is overwhelmed with how to get all of the cleanup done.

“I look at this mess and wonder how I’m ever going to get it cleaned,” she said.

As they looked at the yard between the two houses and at several gasoline and propane tanks nearby, friends at the house Wednesday said it was lucky the fire didn’t grow larger and light those tanks on fire — leading to an explosion.

They said they are in desperate need of any volunteers who are able to help with cleanup to come to the house on Saturday starting at 9 a.m.

Ron Laite, a family friend, advised people to wear old clothes and bring gloves. Volunteers will be pulling items out from the house and yard that can be salvaged or recycled before demolition of the burned house.