Irene Elizabeth Haugen Christensen, 92, passed away peacefully Monday, Feb. 29, 2016, surrounded by her family. Funeral services will be at 2 p.m. Saturday at First Lutheran Church in Albert Lea. The Rev. Diane Odermann will officiate. Friends may visit with the family one hour prior to the service at the church.

Irene was born May 4, 1923, to Ole and Annie Haugen in Wyndmere, North Dakota. She graduated in 1941. Her first job was at a private home in Edina, and moved on to Audio Development Co., where they made Walkie Talkies during the war. 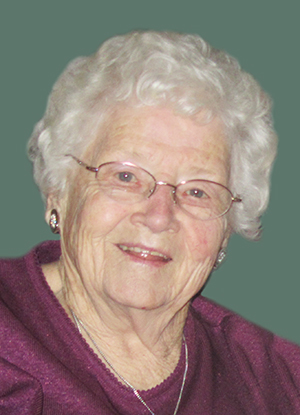 Irene was united in marriage to the love of her life, Earl J. Christensen, on April 19, 1947. Together they raised three children, Patricia, Alan and Jerry.

Irene was a gracious volunteer for many years, making seven trips abroad as a missionary. Some of the areas she traveled to included New Guinea, the Cameroons, Sudan and Central Africa. She attended 15 Elderhostel’s in the United States and other countries, including Spain and Portugal. Irene had a special interest in Mount Carmel Ministries where she and her husband visited several times during the fall. During Rev. Dan Baker’s first summer as a director at Mount Carmel, she spent a memorable time there with her sisters and cousin as well.

She was preceded in death by her husband, Earl; daughter, Patricia; brother, Milton; and brothers in-law Elmer and DeWayne.

In lieu of flowers, memorials are suggested to Peace and Power and Happiness is a Blanket of First Lutheran Church.

Irene’s smile, caring personality and love for her family, friends and God will be forever missed.