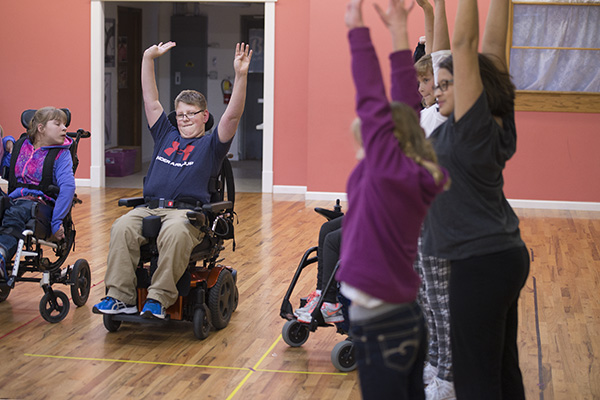 Hunter Johnson does some warmup stretches during an adaptive dance class at Just For Kix in Albert Lea. — Colleen Harrison/Albert Lea Tribune

Parents of special needs children often find themselves looking for activities their children can participate in.

Becky Rognes is one such parent who sought out to do something about it. 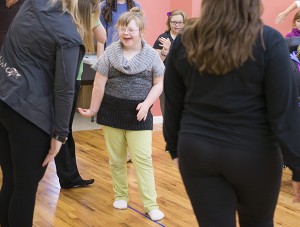 Rosemary Szymanski gets ready to do some line dance exercises during an adaptive dance class at Just For Kix. — Colleen Harrison/Albert Lea Tribune

She approached the Just for Kix directors to consider starting an adaptive movement class, so her teenage daughter Lindsey, who utilizes a wheelchair, could attend dance class just like her sister Leah, who has been taking dance classes for years.

The result has been positive for both the students and the instructors.

Instructor Aimee Struck admitted she was nervous in the beginning and asked herself how she could teach children who might not have full movement of their bodies.

“It doesn’t matter what they can and cannot move,” Struck said she soon learned. “They are just so happy to be here, and their hearts are so big.”

She said one child gave a hug after the first class.

Struck teaches the class with instructors Holly Jackson and Emily Solum. The trio just wrapped up the first six-week section of the class, and Jackson is already planning to have another session.While Struck will be moving out-of-state soon, Solum is enthusiastic about continuing the classes with Jackson. 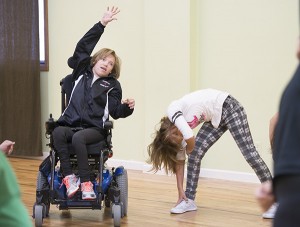 Sisters Lindsey and Leah Rognes work on some stretches during an adaptive dance class at Just For Kix. — Colleen Harrison/Albert Lea Tribune

“They really are like any other kid,” she said. “They like to play. They like to have fun. They like to dance. That’s kind of what they are here for. Again, they’re really not that different; just the way you approach them is different.”

“They’re chatty, they’re fun and sometimes they talk when they’re not supposed to,” Solum added to the list of similarities between the typical student and students who she describes as having “exceptionalities” not disabilities.

Jackson said the first day was about getting to know the students and what they could do, whether it was moving forward, either by walking or in a wheelchair.

The trio then began utilizing props such as pom poms, ribbons and light sticks. Since some of the children may have a more difficult time learning and retaining steps for a routine from week to week, the group does something different every week and then spends the last five minutes of the class performing for their parents.

“Every child has something to offer,” Solum said. “Some may be different or difficult, but you just have to get to know them. Each child is special. It’s really inspiring.”

Those who are interested in taking their special needs child to an adaptive movement class can look for updates about the next session on the Just for Kix Facebook page.