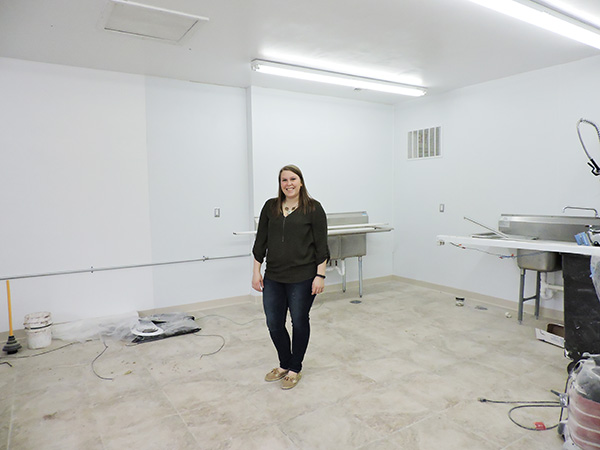 Lacey Hassing stands in the middle of what will be her kitchen once Lacey’s Catering’s renovations are complete. – Kelly Wassenberg/Albert Lea Tribune

WELLS — After months of renovations, Lacey Hassing is getting closer to opening her own catering business at the corner of Franklin Street and Minnesota Highway 22 in Wells.

The facility was once a secondary Casey’s location, but has been vacant for the last few years.

According to Hassing, she immediately approached the company when she heard it was going to close, but was stonewalled for quite sometime. She said it didn’t want anyone purchasing the facility, which could be considered competition for the original Casey’s location in Wells just a few blocks away. It was concerned about new owners potentially selling pizza, doughnuts, sub sandwiches, alcohol, tobacco products or lottery tickets.

It wasn’t until November 2015 that she was finally able to make the representative for the company understand that even though she would make some products, such as doughnut holes, they would be part of a brunch menu and would have to be ordered in advance. She would not have cash and carry items.

After her walk-through, she made the company an offer the same day. The deal was finally closed on Dec. 28.

Hassing said the remodeling project started soon after the keys were handed over. The renovations continue as the north end of the building is being turned into her kitchen while the south side of the building will be her dining area, which will be able to seat about 20 guests. The two areas are separated by a storage room that will hold all of the equipment she needs for catering events.

She hopes the renovations will be complete and all of the inspections done in the next three to four weeks so she can open in May.

The move into a new space has caused a pause in her business, Lacey’s Catering, which officially started Oct. 1 after purchasing Kim’s Cuisine out of Minnesota Lake. Hassing had been working with the company’s owner, Kim Ernst, for years.

“I worked with Kim since 2012, and she asked me in May of 2014 if I was ready to buy the business because she was ready to retire,” Hassing said.

The agreement to purchase Ernst’s business came with equipment, recipes and clientele, but Ernst hasn’t completely retired from the business she began 35 years ago. She has continued to work with Hassing and has been a great resource to go to when she has questions.

Hassing said much of what she has learned about the catering business itself, including what foods keep well and how to transport items, comes from Ernst. However, Hassing also has a culinary background. She worked in various positions at different restaurants through the years before attending South Central College in Mankato. There, the United South Central graduate received her culinary arts degree in 2013 and her business degree in 2014.

Hassing has made a few changes to personalize some menu items and has opened her businesses up to catering events of any size, instead of the minimum of 50 people Ernst once had.

“It’s something different than what you’re going to make at home or find in a restaurant,” Hassing said of her menu, which can be viewed online.

She makes everything homemade, from brunch items, appetizers, entrees and desserts. Customers will be able to order components of a meal to serve themselves or can have Hassing do all the work for them.

She said her catering services allow customers to enjoy their event while she takes care of bringing the food, dishes and even the water guests will drink. Prices for many of her products are on her website, but she will do quotes for custom orders without any obligation. Clients will find buffets can be cheaper than plated meals because there is less work involved, but she makes sure to bring plenty of staff to events as she feels each and every guest should be served promptly, she said.

Hassing said she will eventually host an open house, which could include food sampling so the public can get a taste of what she has to offer. She said the event could take place in May or July. She’s avoiding the month of June due to her schedule, which is full of graduations and weddings.

Hassing also plans to open up the dining room of her business for rental to those who want to host small gatherings or meetings, regardless of whether she caters the event.

Future plans for her business include adding a bar service and expanding her client base to surrounding communities around Wells, Albert Lea and Austin. She currently has clients in the Mankato area and northern Iowa.

To learn more about Lacey’s Catering, visit her website at www.laceyscatering.com or call Hassing at 553-6103.