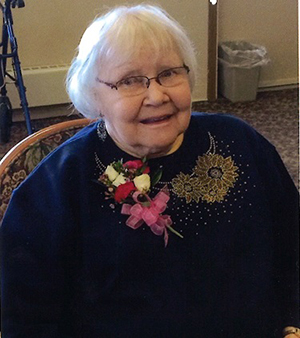 Lorna was born Jan. 6, 1935, the daughter of Carey and Anna (Jepson) Peterson in Emmons. She graduated from Emmons High School in 1952. She married Robert M. Klingbeil on May 9, 1953, in Norfolk, Virginia. To this union four children were born.

Lorna worked different jobs throughout her life, including 23 years at Bricelyn Public School. She was an avid volunteer and an active member of the Bricelyn community. She helped with Meals on Wheels, Bricelyn City Library, Bricelyn Museum and Parent Teacher Association when her children were in school. Lorna attended and taught Sunday school at Bricelyn Lutheran Church, where she was also in WELCA, Esther circle and Needle and Thread. Lorna was a member of the Bricelyn Legion Auxiliary, and was the American Red Cross coordinator for many years. She also enjoyed the Red Hat Society. In 1993 Lorna was appointed to the Minnesota Valley Action Council board in Mankato. Lorna took delight in crafts, counted cross stitch, making quilts and decorating her home for different holidays.

She is preceded in death by her parents; husband, Bob; in-laws Hulda and Silas Klingbeil; sister, Jeanette Ousmon; and brother and sister in-laws.