Funeral services for LuAnn Aman of Albert Lea will be at 10:30 a.m. Monday at Bridge Community Church North. The Rev. Clayton Balsley will officiate. Visitation will be from 4 to 7 p.m. today at Bonnerup Funeral Service in Albert Lea and one hour prior to the service at the church. Interment will be in Hillcrest Cemetery. 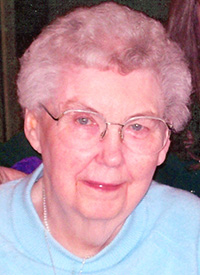 LuAnn was born Sept. 8, 1932, in Maple Island, the daughter of Holger and Katherine (Lorens) Nielsen. She graduated from Albert Lea High School in 1951.

LuAnn was a resident of Albert Lea all of her life and had been employed by the Ben Franklin store and retired from the Metz baking company. She was a longtime member of Calvary Baptist Church, where she spent many years teaching Sunday school. In her free time she enjoyed bowling and coffee with friends, but enjoyed most of all time spent with her family.

Many thanks to the staff of Oak Park Place for their loving care of LuAnn.