Man gets 30 days in jail for explicit photos

An Albert Lea man was sentenced to 22 days in jail Thursday afternoon in Freeborn County District Court after pleading guilty last fall to asking for and receiving sexually explicit pictures from a 17-year-old girl last year.

Daniel Michael Fischer, 19, was sentenced to 30 days in the Freeborn County jail and given credit for eight days served. 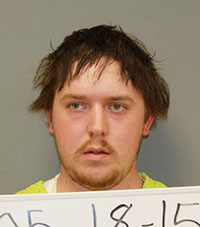 According to court documents, a Freeborn County Sheriff’s Office detective reviewed Facebook messages between Fischer and the girl. Fischer reportedly asked her to send him sexually explicit photos to his phone on March 4, 5 and 7, 2015.

He reportedly met with the detective in May at the Freeborn County Law Enforcement Center and admitted he had asked her for the photos and that she had sent them.

Fischer pleaded guilty to one count of using a minor in a sexual performance or act in October.

He was initially charged with an additional count of using a minor in a sexual performance, possessing pornographic work and violating a restraining order, but those charges were dismissed as part of a plea agreement.

District Court Judge Ross Leuning placed Fischer on probation for up to 10 years.