Funeral services for Marvin R. “Pat” Goette of New Richland will be at 2 p.m. Friday at St. Peter Evangelical Lutheran Church in New Richland. The Rev. Scott Williams will officiate. Visitation will be from 4 to 7 p.m. Thursday at Friedrich Funeral Home and one hour prior to the service at the church. Interment will be in the St. Peter Lutheran Cemetery. 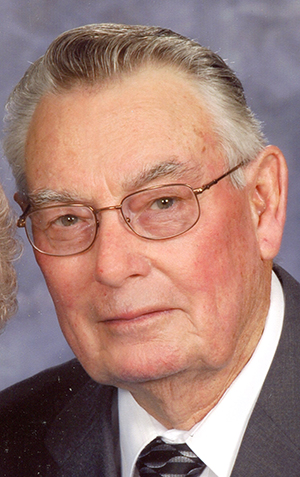 Marvin was born Oct. 29, 1929, in Kiester, the son of Albert and Laura (Schewe) Goette. He attended country school in Kiester and moved to the Hartland area in 1946. On Dec. 3, 1950, he was united in marriage to Marcella Hansen in Bricelyn. Together they moved to New Richland in 1957, where they farmed.

Marvin was an active member of St. Peter Evangelical Lutheran Church, serving on church council and as an usher. He loved farming and taking care of his equipment and the land. Marvin was known for his clean machinery and well-groomed land. He enjoyed fishing, oldtime music and dancing, watching TV westerns and family trips to Alexandria. Most important was the time spent with his family and grandchildren, attending all of their sporting events.