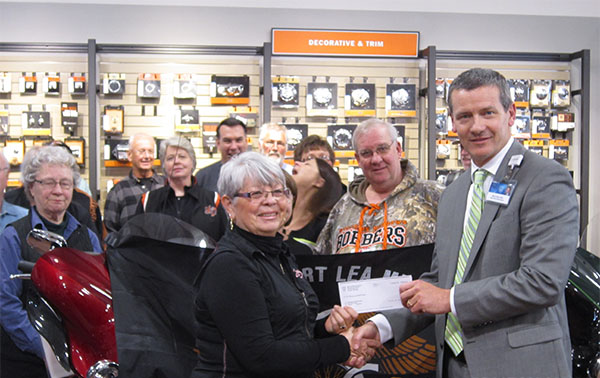 Mark Ciota, right, presents a check for $1,000 from the Mayo Foundation for Medical Education and Research to Judy Renwick, Harley Owner’s Group volunteer for the Nation of Patriots. – Provided

Mark Ciota presented a check for $1,000 as a donation from Mayo Foundation for Medical Education and Research to the 2016 Nation of Patriots tour on Thursday during the Harley Owners Group Chapter 2377 meeting.

The Nation of Patriots is a volunteer group and all of the funds raised are used directly to assist combat wounded veterans. No administrative costs are deducted  from donations the group receives.

The 2016 Nation of Patriots Tour embarks from Wisconsin on May 28. A flag flown in combat will be escorted through the lower 48 states for 100 days  of fundraising and then returns home on Labor Day weekend.