Need for Broadband up, but who will pay bill? 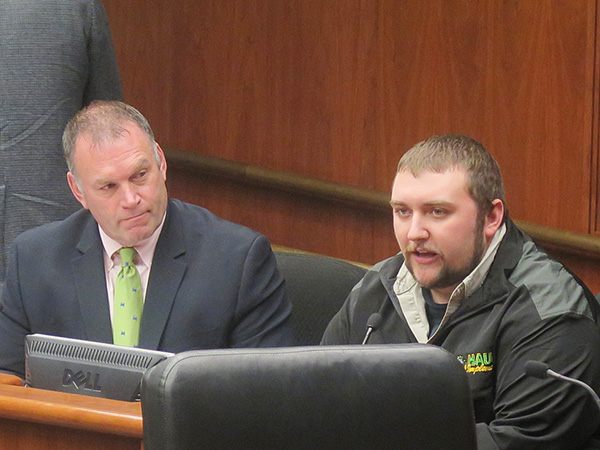 Republicans, Democrats differ on how much to give

Sharp differences are emerging over how Minnesota leaders will spread high-speed Internet to more households and businesses around the state. The key question: How much of the budget surplus will they spend?

A Republican-led House committee made its opening bid on Thursday with a bill that would devote $35 million to a broadband expansion fund and put the emphasis on communities that are unserved with high-speed access, but also pay some attention to those that are considered underserved.

“Our goal from the beginning has been that we have to reach the outside limits when it comes to broadband,” said bill sponsor Rep. Dave Baker, R-Willmar. “This bill still keeps that last mile very much in focus as our priority.”

Broadband is a crucial issue for many of Baker’s constituents, including Sam Romain, who does aerial imagery of farm fields for an implement dealership in Willmar. In concept, his customers in the countryside should be able to get those images with a simple click. But getting a connection that works isn’t so simple.

“A lot of times my growers … I call them and text them and say your imagery is available to download. They go, ‘OK, great. When I find time to go into town and go to the library or McDonald’s to download my data then I can use it,’” said Romain. “What good is that to them or anyone who needs real-time data?”

While that frustration crosses political lines, there’s still discord over how much to kick in and how to ship the dollars out.

Republicans have questioned the need for a package the size of Dayton’s given the promise of significant federal money. An amendment to reach Dayton’s mark was ruled out of order in the House committee. But anything short of that will leave too many places out or result in slower connections for those that get grants, said Rep. Tim Mahoney, DFL-St. Paul.

“I think we’re going to get the barebones, and our Greater Minnesota communities need better than barebones,” he said.

The debate isn’t just about money. There are questions about the level of public involvement in typically private offerings, the requirements for minimum download and upload speeds and whether the projects can keep up with fast-changing technology.

Years ago, the state adopted a goal of statewide access to quality Internet by 2015. This bill pushes the finish line out to 2022 and strives for 25 megabytes per second download speeds. Think of it as being able to download a two-hour movie in about seven minutes.

Even Internet service with download speeds of 10 megabytes per second and uploads of one megabyte per second is worth doing, said Baker.

“I’ve got folks in Kandiyohi County that would be absolutely flipping happy if they could get 10/1 right now because they have nothing,” he said. “They would be so happy.”

Lt. Gov. Tina Smith argues the money doesn’t all have to come from taxpayers and that the state investment would leverage local and private provider dollars. “Every dollar we invest in this broadband program is getting at least another $1, $1.50 to expand the whole program,” she said.

The state has a long way to go to meet Dayton’s 2010 campaign pledge for border-to-border broadband, she acknowledged. There are estimates that 244,000 people lack speedy Internet and it would take $3 billion to reach the goal.

Advocates for rural cities and small towns said the available dollars have barely scratched the surface.

Dayton and Smith, the governor’s point person on the issue, couldn’t help but shrug when outlining their proposal this week as they caught criticism from both sides about the amount they settled on.

“So we have both a drop in the bucket, and is it too much?” Smith said.