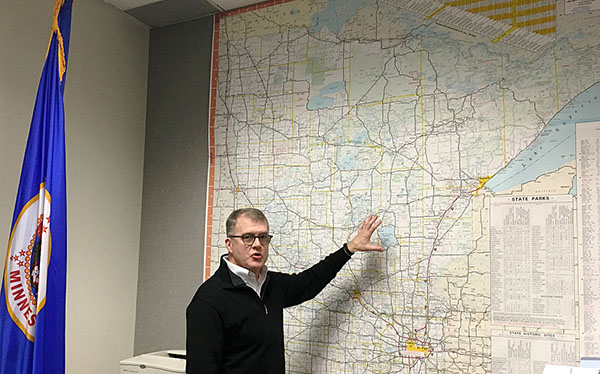 The spring melt and onset of tornado season typically put Minnesota’s emergency managers on high alert. If a major disaster strikes, they look to a special state operations center to help coordinate the response.

The officials who run that control center say it’s time for a new one. But it won’t come cheap.

Department of Public Safety leaders consider the Emergency Operations Center out-of-date and poorly located. They say its downtown St. Paul headquarters is too close to the seat of government, making it vulnerable if the Capitol or city center were targeted. They want a new building miles away.

They’re asking lawmakers for $33 million to build one at the old Army munitions site in Arden Hills. The project has been on the table in the Legislature

before, but mustered only planning funds in the past.

“If this was a report card that you brought home whether it’s access, functionality, redundancy, security, we would be getting a dismal grade in all of those,” said Kelly, who’s leading the funding charge at the Legislature.

Kelly’s vision is for a standalone building of 52,000 square feet — more than double the size of the current center — that is more fortified and with state-of-the-art features. He said it’ll be cheaper to operate than the current one.

Gov. Mark Dayton is already on board. He has made the project one of the biggest single items in a package of construction projects he sent to lawmakers.

Legislators from both parties said they support the goal. Their challenge is to make such a big request fit into a bonding bill where the competition for state borrowing is fierce.

The price tag may be high but the center is important, said state Sen. Bill Ingebrigtsen, R-Alexandria, a former county sheriff.

“Stuff that we have now is way different than when I was back there nine years ago,” he said. “All that technology takes money and you have to have a facility to light in.”

In the past five years the center has been thrust into action for more than 400 emergencies, from floods and train derailments to avian influenza and the international Ebola scare.

Despite the action, it doesn’t look like the high-tech control rooms depicted in TV shows. There aren’t banks of monitors or dashboards manned by technicians. Instead, the center is mostly an open room that, when needed, is filled with tables, phones, wall maps and dozens of state agency representatives who help call the shots and deliver assistance in a crisis.

“Whether it’s natural or manmade disasters, you have to have a lot of pre-thought that goes into it and they are very important,” said Stumpf, DFL-Plummer. “Preparation is so much better than trying to clean up after.”

Bouts with frequent floods and a massive tornado in 2010 have made the center indispensable in the Red River Valley region that Stumpf represents.

“In the state emergency operations center they have all the key partners, all the people who can make the decisions and offer assistance in a single room,” he said. “Many of those resources just aren’t available anywhere else in the state.”

Kelly made that sentiment part of his opening pitch to a House committee this week.

“We think it would be totally unacceptable if state government couldn’t answer those calls for help,” Kelly told lawmakers.

His presentation didn’t elicit much reaction nor any guarantees. The final decision probably won’t come until the session ends in May.