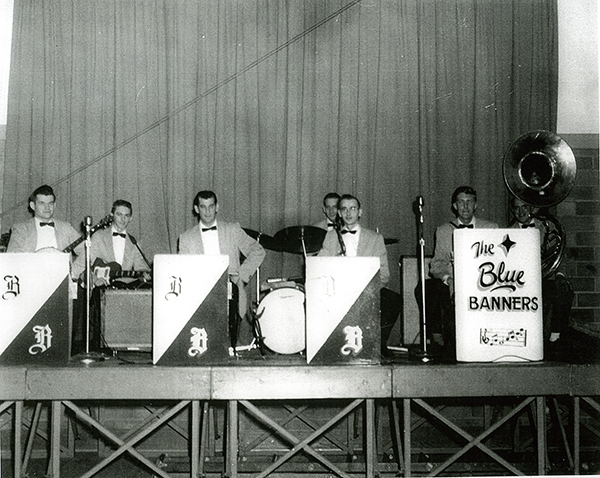 Some notable and popular polka bands dating back 50 plus years were the Jolly Lumber Jacks, Six Fat Dutchman and Frankie Yankovic, who all played in Minnesota and the upper Midwest states.

In recent times, probably the most popular area polka band was The Blue Banners, who became synonymous with playing polka, waltz and country music for over 50 years.

For people that followed and danced to the polka and waltz forms of music, they would call it old-time music. Often, the polka type of music was also called oom-pah-pah music which was characterized by an emphasis of bass, especially the tuba. The main instruments in these old-time polka bands usually consisted of a trumpet, saxophone, concertina or accordion, guitar or banjo and drums.

Most old-time polka music played in Minnesota and other upper Midwest states was often referred to as German-American because of the early German settlers bringing their type of music from the homeland.

The Blue Banners first started playing in fall 1954 with the original players of Don E. Johnson playing the banjo and guitar, Lloyd “Ole” Allen playing the push button accordion and doing the bookings, Doug Guenther playing the sax and drums, and Donald Fisher playing the guitar. All of the original band members were from the Alden area.  The band eventually went to seven members. The band in the early years sometimes called themselves “Minnesota’s youngest old-time band,” as no band member at that time was over 28 years old.

One former band member, Paul Donnelly, who played for The Blue Banners, also at one time played for the Lawrence Welk Band in South Dakota.

Don E. Johnson, the leader of the band, tells the story of when the band first started playing in bars, there was no pay from most the bar owners and the band would have to “pass the hat” for donations from customers for the night’s pay.

The original name for The Blue Banners started out as the TV Hep Cats, which they got from the name on a set of drums used by the band. The band changed its name in 1956 when Don E. Johnson bought a used banjo with the brand name of Banner Blue stamped on it. The band members saw the brand name on the banjo and then decided to reverse the name to current name of The Blue Banners.

The Blue Banners played mostly in the middle and southern parts of Minnesota, but at times also played Iowa and Wisconsin. The majority of the time the band played at public dances in ballrooms, dance halls, service clubs such as the Eagles, Moose and Elks, wedding dances, occasional battle of the bands with other polka bands and summer Sunday afternoon concerts at Albert Lea’s Edgewater Park.  The band also played at times for a Mankato TV station for its weekly barn dance show and at one time played at the roller skating rink in Kiester.

Some of the more local dance halls and ballrooms The Blue Banners played were the Golden Bubble in rural Wells, Palm Garden in Albert Lea, Playmore Ballroom in Rochester, Terp Ballroom in Austin, Surf Ballroom in Clear Lake and the Monterey Ballroom in Owatonna.

According to Don E. Johnson, the band not only played on most weekends, but often played on week nights. With most of the band members having day jobs, Don said “the nights got really short.”

In the middle 1960s, the band recorded polka and waltz music of 45 speed and 33 1/3 speed records and later on recorded songs on tapes and CDs.

For now, mostly good times and memories exist as the band hasn’t played on a full-time schedule since 2012 because of member’s retirements, some members passing on and health reasons.   Also, society has changed greatly from the 1980s to the present time with less people going to dance halls and service clubs, resulting from aging customers and declining interest in old-time music, economic shifts, other entertainment options and because of most dance halls or ballrooms closing or being used for other types of businesses.

The band, however, does play a few times a year on special occasions and at the Freeborn County Fair by borrowing some band members from other bands. As Don E. Johnson is now retired from the band, his son, Lyndon, now leads the band when it plays.