On Super Tuesday, Minnesota goes its own way

MINNEAPOLIS — Minnesota stood alone on the Super Tuesday map, handing Florida Sen. Marco Rubio his first and only win for the Republican nomination even as Donald Trump padded his lead elsewhere.

The state’s Democrats also backed an underdog during Tuesday’s caucuses, throwing their support behind Bernie Sanders — one of four states the Vermont senator captured against front-runner Hillary Clinton on the busiest day of the primary season. 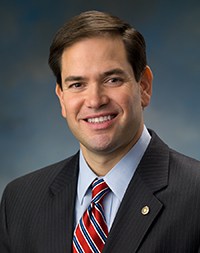 Minnesota is no stranger to standing out in nomination contests, as Republican voters haven’t picked the eventual party nominee in an open contest since 2000. Sanders and Rubio both still face huge climbs to snag their parties’ nod that likely will only grow even after wins at Minnesota caucuses.

Both parties still were tabulating results late Tuesday night that will determine candidates’ final delegate haul, including how many may fall to the caucus night losers thanks to Minnesota’s proportional allocation system. Republican Ted Cruz was poised for a second-place finish in Minnesota, relegating Trump to potentially his worst showing of the primary season so far.

Rubio and Sanders made recent visits to the state that has normally been an afterthought in the race to the nominating conventions. The attention, combined with the appeal of outsider candidates, translated into banner turnout for both parties.

Thousands of voters wound around staircases and hallways inside a Minneapolis recreation center to cast ballots for the Democratic caucus, quickly drying up the site’s supply of printed ballots and forcing officials to use scraps of notebook paper for votes. At a GOP caucus in the northwestern Minneapolis suburb of Maple Grove, caucus-goers first filled up a middle school auditorium, then packed several overflow rooms.

Several Democratic voters weighed a sense that Sanders best matched their values against a belief that Clinton might give Democrats the strongest chance to maintaining the White House. While she said the former secretary of state may be a safer bet to win in November, Amy Shaunette sided with Sanders due to his vow to tackle income inequality and his appearance on the Ellen DeGeneres show, among other factors.

“It’s all a mess,” she said. “We might as well have someone that I really believe in at the center of the mess.”

Sanders spent more time in Minnesota than any other candidate, rallying in the state’s most liberal pockets in recent days while Clinton largely relied on surrogates until last-minute trips to a Minneapolis coffee shop and marketplace.

Rubio was the lone GOP candidate to drop into Minnesota as his rivals focused elsewhere, hosting a caucus-day rally in a Minneapolis suburb after a visit last week. Steven Trobiani headed inside the Maple Grove caucus site with his mind made up for Rubio.

“Marco Rubio appears to be a candidate who has taken up the mantle of representation of the middle class, and I think we desperately need that,” the 65-year-old neurologist said.

But Trobiani noted Trump’s wide lead in the GOP race.

Asked if he’d back the New York businessman as the party’s nominee, he answered: “Unfortunately, yes.”

Seventy-seven Democratic delegates were up for grabs in Minnesota on Tuesday, with 38 on the Republican side. And there’s an extra 16 for Democrats in the form of so-called “superdelegates” — party bigwigs and elected officials who cast votes independent of the results. Most had already pledged their support to Clinton ahead of Tuesday’s vote.