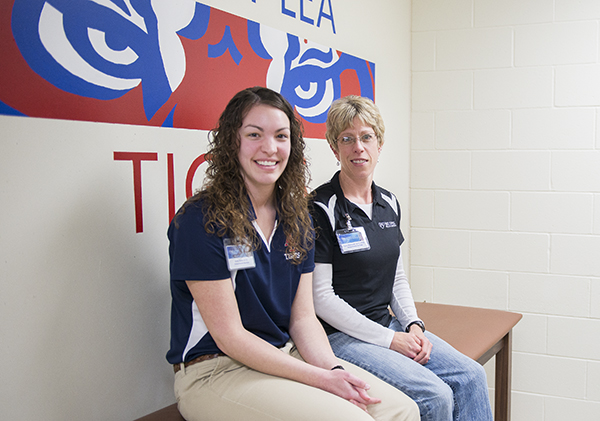 With March being National Athletic Training Month, the spotlight is now on two of Albert Lea’s own.

Lynn Rothmeier and Emily Seiler are certified athletic trainers who work out of HealthReach through Mayo Clinic Health System in Albert Lea and Austin. Their primary work site is Albert Lea High School, but once a week they also do outreach out of Alden-Conger, Glenville-Emmons and NRHEG high schools. They are also present at all home sporting events for all of Albert Lea High School’s  full-contact sports, such as football, soccer, wrestling, basketball and hockey, among others.

Rothmeier, an athletic trainer based out of Albert Lea for the last 23 years, said she first pursued training as a career from growing up around sports. Her father coached multiple sports and Rothmeier herself competed in volleyball, basketball and track. She also grew up having a female athletic trainer  around her school, which she said was during a time when women weren’t as prominent in the athletic training field. She is originally from Spicer and got her degree in athletic training from Gustavus Adolphus College in St. Peter.

Wacholz was an athletic trainer with Rothmeier for nine years before becoming Albert Lea High School’s activities director in September 2014. She also had Rothmeier as a trainer during her time as a student athlete.

Rothmeier said something that becomes more and more prevalent in their work is spreading awareness about concussions. They’ve started using a concussion management software that they have athletes run through when they’re uninjured to get a baseline for their normal brain activity. Having that baseline, she said, helps them to see more precisely what’s going on when an athlete does withstand a concussion and shows them the impact on the athlete’s brain. The imPACT software — which stands for immediate post-concussion assessment and cognitive testing — maps a person’s brain to see what its normal functionality is.

“It’s a big piece of what we do,” Rothmeier said.

Both Rothmeier and Seiler love their jobs.

“Helping people get back to doing what they want to do is a good feeling,” Rothmeier said. “It makes you feel good that you can handle those tough situations.”