Saving money and the environment 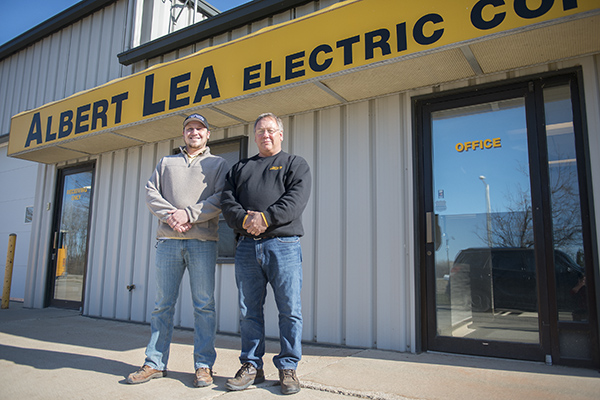 One Albert Lea company has been trying to give its customers more power — solar power. 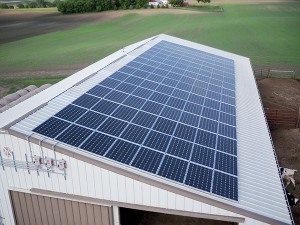 Mick Delger and Josh Quinlivan work at Albert Lea Electric Co., 1410 Olsen Drive in Albert Lea. Delger has owned the business since the early ’80s, and said it has been in operation since 1919. Quinlivan, an administrator at the company, has worked there since 2004.

Both men said that while they’ve installed just three solar power systems over the past two years, the customer inquiries they’ve gotten about the energy source have steadily grown from year to year.

Albert Lea Electric Co. installed its first solar power system on a farm two years ago, which was a 40-kilowatt system. The two jobs that followed were both on rural residences, one of them being Delger’s own home. Both the second and third installations started out as 10 kW systems, with Delger eventually adding 20 kW more onto his house’s system.

According to Delger and Quinlivan, a typical house within Albert Lea city limits would probably use a 6 to 8 kW solar panel system installed on its roof, depending on the size of the house and its usage amount.

When looking to install a solar energy system unit, the business starts out with looking at the proposed property location via satellite, along with invoices from the customer’s electric company so that the best size suited for the customer can be determined. Once plans have been determined, a timeframe for installation depends upon how quickly suppliers can get materials to Albert Lea Electric Co. — something Delger and Quinlivan said typically takes about two to four weeks. The amount of time for installation depends on a multitude of factors, such as the size of the system being installed and what factor weather will have on the installation, among others. Roof systems can be installed year-round. Stationary systems can also be installed year-round, according to Delger, but may be more expensive if working against frost or frozen ground during the colder months. The 40 kw system the company installed took about two weeks with three to four people working to install the system.

Both men said the only drawback to solar power is the initial cost of installation, but that the cost pales in comparison to the multiple benefits of using solar power.

Delger said there’s an estimated 5 to 7 percent investment return when it comes to investing in solar power — something he considers to be a pretty good investment, especially since it’s guaranteed. Installing solar power also adds value to a property, but will not be a factor when it comes to a rise in property taxes due to increased value under a state statute in Minnesota. Meaning, customers can’t be taxed extra for using solar power, even though it adds value to their property. Solar panels also become an added selling point when looking to sell property, they said.

From a business aspect, Delger and Quinlivan said that businesses, including farmers, are eligible for grants and a federal tax break of up to 30 percent if using solar power in their business operations. They said it also helps cut down on supplemental costs in the agriculture industry.

Both men encourage people and businesses in their service area — which is anywhere within about 100 miles of Albert Lea — to look into solar energy and to see what solar power can do for them.

“We’re excited about it here,” Delger said. “We like installing it.”

For Delger and Quinlivan, the biggest incentive to using solar power is the positive impact it has on the environment. The two said that the one-year impact of using solar energy is the equivalent of 20,000 pounds of carbon dioxide emissions, 500 trees planted and 40,000 light bulbs lit. They also think the rise in advertisement of solar power as the “new energy out there” has gotten more people interested in learning more about the resource. In the solar energy installations the company has done so far, Quinlivan thinks the panels have sparked an initiative to save energy, saying that a few of those customers have become more interested in using LED lights and other more environmentally-conscious methods.

“It’s not just about saving money,” Quinlivan said. “It’s about being environmentally responsible.”

The one-year impact of using solar energy is the equivalent of the following: