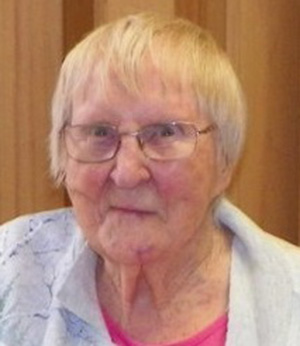 Arrangements are being completed by McRaith Funeral Home & Crematory in Waseca.

Thora Margaret, daughter of Hans and Emma (Jacobson) Madson, was born May 30, 1914, on the home farm south of Hartland. Thora was baptized on June 28, 1914, at West Freeborn Lutheran Church and confirmed on June 24, 1928, at Hartland Lutheran Church. She attended country school District 10 through the eighth grade. On Sept. 19, 1934, Thora was united in marriage to Chris P. Peterson  of Bath. They were blessed with eight children. In 1972 they divorced.

Thora was a homemaker most of her life, caring for her children and helping on the farm with the cows, pigs and chickens. She also had two large vegetable gardens, a huge strawberry bed and an apple orchard, with the produce being canned to help supply food for the winter. Through her love for cooking and baking — especially making lefsa and krum kakes —Thora shared her wonderful cooking skills with family and friends. In 1972, Thora moved to Waseca and worked at Birdseye for seven years.

She was active in the Senior Center, where she helped prepare many Thanksgiving dinners for people in the area. There she also met her good friend and companion, Jack Larson. In 1996, Thora and Jack moved to Broadway Apartments in Wells. Jack died in November 1999 and in November 2013, Thora moved to Parkview Care Center.

Thora always enjoyed the holidays, and was looking forward to her 102nd birthday and the Madson cousin reunion in August. She will be remembered for her warm smile and caring way.