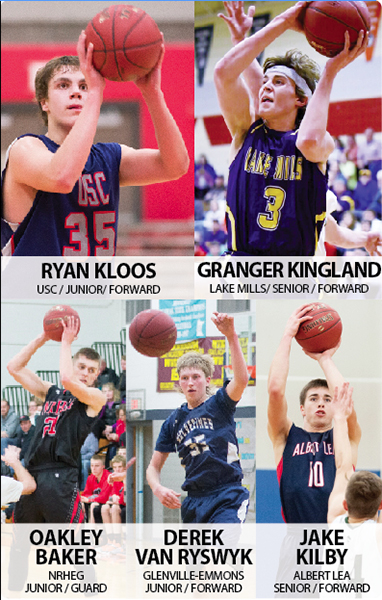 Kingland, a forward, was the leading scorer in the Tribune’s entire coverage area with a total of 627 points this season. He led the state of Iowa in scoring average with 27.3 points per game. He is now Lake Mills’ all-time career scoring leader with 1,458 career points, and also holds the single-game scoring record at Lake Mills with 43 points against West Hancock this season. He led the Bulldogs defensively this season, as well, with 54 steals and 15 blocked shots. He averaged 9.4 rebounds per game, and shot 57 percent from the field and 87 percent from the free throw line.

Kloos was the leading scorer in the Tribune’s coverage area in Minnesota. The forward had a season total of 571 points and averaged 21.1 points per game. He led the Rebels with 7.3 rebounds per game, and shot 56 percent from the field and 65 percent from the free throw line.

Along with fellow forward Kingland, Van Ryswyk makes his second consecutive appearance on the Tribune’s All-Area First Team. The Wolverines junior averaged 20.6 points and 11.8 rebounds per game, and recorded 20 double-doubles — two of which were performances of 39 points, 20 rebounds, and 42 points, 19 rebounds. In addition, Van Ryswyk scored his 1,000th career point this season and is currently around 1,400 career points — putting him on pace to become Glenville-Emmons’ all-time leading scorer next season, according to coach Jared Matson.

In a competitive Big Nine Conference, Kilby was an offensive leader for the Tigers with a 16.52 points per game average on a total of 446 points. He also averaged 4.75 rebounds, 2 assists and 2.7 steals per game. The forward was also an All-Conference Honorable Mention this season.

A four-year starter who has played in 88 consecutive games, Einertson led not only the Vikings, but the Top of Iowa Conference with 410 points and 71 steals this season. He  holds the record for career steals at Northwood-Kensett, and is second in career scoring with 1,246 points.

The Tigers guard put up 372 points for a 14.31 points per game average this season in a Big Nine Conference with a lot of talent. Thompson also had a consistent average of 4.5 rebounds, 4.15 assists and 3.5 steals per game. He received All-Conference Honorable Mention recognition this season, as well.

Fick averaged 16 points and 10.6 rebounds per game, while also having 16 double doubles this season. He’s the leading rebounder in the Top of Iowa Conference this season with a total of 234, and was fourth in the conference in scoring with 353 points.

Cole, a forward, averaged 12.7 points per game on a total of 344, and led the Panthers with a season total of 196 rebounds for an average of 7.3 rebounds per game. He also averaged two assists and 1.5 steals a game.

Wallin was the Knights’ leading scorer and rebounder, and  was team captain and a three-year varsity starter. He averaged 12.3 points and 12.1 rebounds per game, and was named an All-Conference player in Alden-Conger’s Valley Conference.

Key stat: Second leading scorer and rebounder for the Knights with 11.4 points and 7.5 rebounds per game.

Key stat: Hold the Northwood-Kensett career assist record with 422 and averaged 7.3 assists a game this season.

Key stat: Was Alden-Conger’s third leading scorer and rebounder with 11.4 points and six rebounds per game.

Key stat: Led the Rebels with 4.9 rebounds per game.

Key stat: Made 30 three-pointers this season.

Key stat: Shot 83 percent from the free throw line and hit 38 three-pointers on the season.