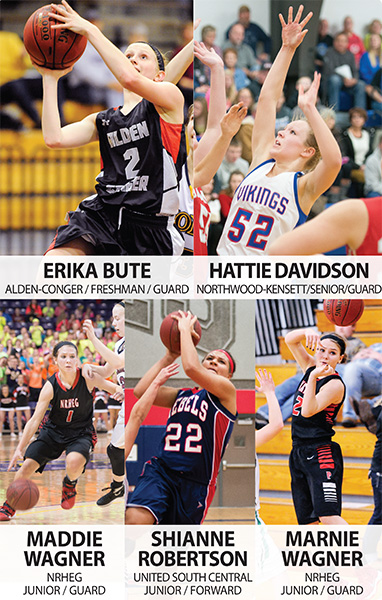 Bute, the youngest player to be recognized on this round of All-Area teams, led the Tribune’s entire coverage area in scoring with 577 points this season for an average of 25.1 points per game. The guard also averaged 7.7 rebounds, 2.9 assists and 4.1 steals per game for the Knights. The Alden-Conger team captain was also both an All-Conference and All-Academic selection in the Valley Conference this year. Coming off of her freshman season, she is already just 20 points shy of 1,000 career points.

Davidson, a guard, was the second-highest scorer in the Tribune’s coverage area this season with 508 total points for an average of 21.2 points per game. Making her third consecutive appearance on the Tribune’s All-Area First Team, Davidson also racked up 82 assists, 95 steals and 17 blocks for the Vikings. She was Conference Player of the Year in the Top of Iowa Conference, and was named to both the Iowa Newspaper Association Class 1A Second Team All-State and the Academic All-State Team.

Making her second consecutive appearance on the Tribune’s All-Area First Team, Maddie Wagner led the Panthers in scoring with 437 points, and tied with her twin sister, Marnie Wagner, for a team-high 62 steals each. Together, the two guards helped NRHEG reach the final round of the Section 2AA tournament, making it farther into the postseason than any other basketball team — boys’ or girls’ — in the Tribune’s coverage area this season.

Robertson was such a force for the Rebels this season, that the team lost its last three games — games that Robertson missed due to illness.

“When she went out it left a huge hole,” said United South Central coach Dale Koestler. “We couldn’t replace her.”

The only forward named to the Tribune’s All-Area First Team, Robertson averaged a double-double each game. She was United South Central’s leading scorer and rebounder with an average of 16.8 points and 11.6 rebounds per game.

Coming in at a close second to her sister, Marnie Wagner was the Panthers’ second-leading scorer with 420 points this season. She led the team in other categories, though, with a season total of 254 rebounds and 62 steals.

A guard, Knudtson racked up 310 points for the Bulldogs this season for an average of 13.5 points per game. She also scored 43 three-point field goals, and holds the Lake Mills assist record at 100.

Rehnelt, a guard, led the Tigers in every major statistical category as a sophomore. She scored 323 points this season for an average of 12.4 per game, while contributing 145 rebounds, 33 assists, 68 steals and 13 blocks on the season.

Allis, the only center recognized in either the first or second All-Area teams, dominated in the statistical category of blocks this season. She had a season total of 182 blocks, averaging 7.3 blocks per game for the Rebels.

“They don’t block shots like this girl,” said Koestler. “There isn’t anybody else around here that blocks shots like she does.”

Earning First Team All-Conference honors along with Davidson, Low was another force to be reckoned with for the Vikings this season. She averaged 13.4 points and 3.5 rebounds per game, and had 63 assists and 69 steals this year.

The guard was an Honorable Mention All-Conference selection for the Top of Iowa Conference, and averaged 13 points, two rebounds and two steals per game.

Key stat: The forward was second in the state of Iowa regardless of class with 12.6 rebounds per game this season.

Key stat: The guard led the Wolverines in points, assists and steals with 135 points, 33 assists and 56 steals this season. She also made 29 three-pointers.

Key stat: Klocek, a guard, shot 34.3 percent from three-point range for the Rebels this season.

Key stat: Collins had 269 points, 90 rebounds, 55 assists and 28 steals for the Panthers this season.

Key stat: Orban is the sixth-leading scorer in Lake Mills history, according to Bulldogs coach Thad Evans, and shot 79.5 percent from the free throw line.