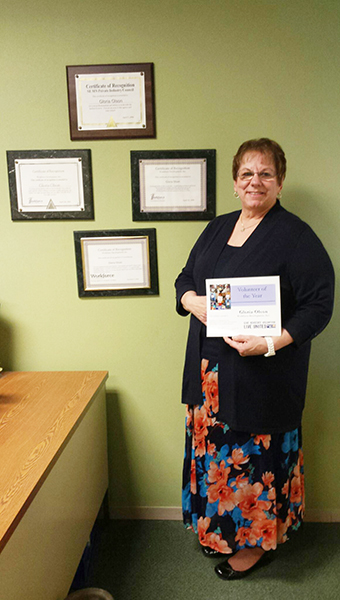 Gloria Olson was named the United Way of Freeborn County’s Volunteer of the Year. -Provided

The United Way had its annual meeting and campaign celebration March 16.

Special recognition Give Awards were awarded to the top five businesses with a more than 20 percent increase in donations. Business to receive this recognition were the United Parcel Service, 20 percent; Cedar Valley Services, 28 percent; Albert Lea Area Schools, 29 percent; the city of Albert Lea, 31 percent; and Herberger’s, 39 percent.

Special GIVE awards were also presented to a number of businesses.

Mrs. Gerry’s was awarded the growth award for increasing its campaign every year through engaging employees in presentations, information about local programs and events.

Cargill was named the Most Increased Employee Campaign. Many people are engaged in the workplace campaign and helped people recognize the impact their dollar has. Cargill also has been a great supporter of the Community Resource Center and co-sponsored the Diversity Day event in October.

The Most Generous Employee Campaign was awarded to Albert Lea Select Foods, which has had the largest campaign for eight years in a row. They talk with each employee and help them understand the impact United Way programs have in the community. They continue outreach year-round with new employees, which really makes an impact.

The United Way Volunteer of the Year was awarded to Gloria Olson.

Olson was trained as a poverty expert and plans to provide education for the community and other communities about barriers for people in poverty. She has taken her engagement even further, and is now chairwoman of Lift One, Life All. She co-leads a local mental health support group and is working on a mentorship effort for Alternative Learning Center students.

The Live United Award went to Minnesota Corrugated Box. The company has been a community partner for years with many local organizations. Lately, it has expanded their reach, but continue to focus a majority of efforts within Freeborn County. Last year, the United Way engaged its workplace coordinator with an idea to get more involved with Rocking the Block. Management approved having staff on site every day for a week. The staff worked on Sandra Thompson’s home. According to a press release, it would not have been completed without their help.