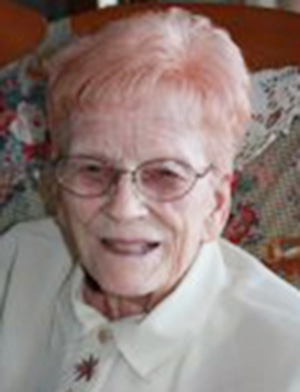 Virginia was born  Dec. 22, 1917, in Dickens, Iowa, to Harriet Ann (Mayes) and Harry Ernest Rideout. She graduated from Austin High School in 1937.  She was united in marriage to Gustaf August William Friedrich on Oct. 15, 1938, in Canton, South Dakota. They had three children, Rodney William, Roger Anthony and Rachelle LaZette. This marriage was dissolved in 1965. She married Leonard Wieczorek in 1971 and they divorced in 1980. On June 22, 1984, she married Donald Eugene Thomas in Albert Lea. Don passed away March, 31, 1985, but not before he and Virginia created many happy memories together camping in Lanesboro.

During her working career she was employed in various positions, including many years at Hormel in Austin and at the Freeborn County Register of Deeds as a deputy clerk. She retired June 29, 1984, from Freeborn County.

She was a member of Our Savior’s Lutheran Church in Albert Lea. She was a proud member of the Auxiliary of the American Legion, Veterans of Foreign Wars, Fraternal Order of the Eagles, Aerie No. 703, Audubon Society, Genealogy Society, Albert Lea Garden Club and State Line Polka Lovers. She was a Gray Lady volunteer at St. Olaf Hospital and also at the Red Cross mobile blood bank, both in Austin.

Throughout her life she enjoyed many hobbies, including polka dancing, genealogy, camping, fishing, wedding photography, sharing stories about her life adventures and spending time with her beloved pets. She was an avid reader and book collector. She was proud to have lived independently in her own home with her pets until the age of 91.

Virginia is survived by her daughter, Rachelle LaZette (Darrell) Cafourek, of Albert Lea and their children Shawn (David) Anderson, Cindy (Jarett) Schiebel and Heather (Aaron) Hamilton; son, Rodney (Sandra) Friedrich, of Austin, and their daughter, Lisa (Steve) Johnson; and son, Roger (Carol) Friedrich, of Commerce City, Colorado, and their children Jill (Clayton) Daughtrey and Terry Friedrich. She is also survived by 15 great-grandchildren and one great-great-granddaughter.

Services will be at 11 a.m. Friday at Bonnerup Funeral Service in Albert Lea.  Friends may visit on hour before the service. The Revs. Aaron Hamilton and James Kassera will officiate.  Interment will be at Hillcrest Cemetery in Albert Lea.

May she rest in peace with the Lord.