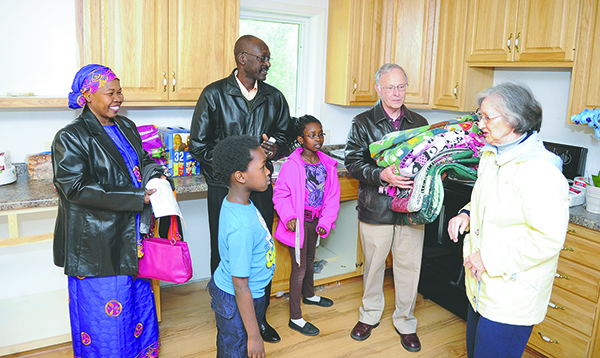 Bruce and Liz Richardson give quilts to Gabait Nagid and Nasra Damin and their children Sabreen and Saber during their house dedication through Habitat for Humanity Thursday afternoon. – Eric Johnson/Albert Lea Tribune

AUSTIN — A family of four has a new place to call home in Austin. 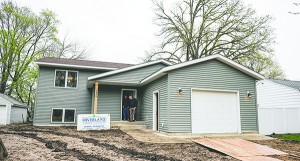 People come out of the home built through Habitat for Humanity for Gabait Nagid and Nasra Damin during the home dedication Thursday afternoon. – Eric Johnson/Albert Lea Tribune

The four-bedroom, two-bathroom home will move the family out of its current housing, a small Albert Lea apartment. The family will move into the home in June.

Freeborn/Mower Habitat for Humanity Executive Director Brigitte Fisher said they are thrilled for the family to move into this house.

“We’re so excited for this family and through the new lives they’re going to create here,” Fisher said.

Habitat for Humanity wasn’t alone in building the 33rd home. After realizing some of their dedicated volunteer force was growing older and not able to commit the work it takes to build a house, they called on Riverland’s carpentry program to help them, Fisher said.

“When Brigitte approached us and said, ‘Hey, will you help us out with trying to build this house?’ We thought about it for two seconds and said absolutely,” Matt Bissonette, dean of trade and industry, said. “… Because we are a community college and this is about the community and this was a perfect opportunity for us to give back to the community.”

He said their faculty got the opportunity to figure out how to work with a service organization, their students got to build a house, and a family received a beautiful home.

“We’re proud to be part of that effort,” Bissonette said. “We hope to do it again next year.”

Fisher added volunteers and family members were on site working alongside the carpentry students. Instructors Tom Wilker and Walt Alms oversaw the students’ work. The wiring of the house was completed by Riverland electrical program based at the Albert Lea campus. 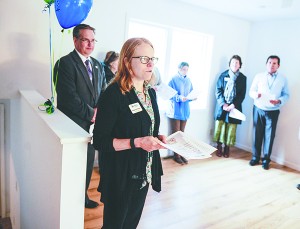 Wilker said the project went very well and though the students may come from different backgrounds, they did well and “came along tremendously.”

“Getting them to do a project like this is so overwhelming, to see them come together as a team,” Wilker said. “They need to understand when you start something, you need to take it all the way through completion (and) a house does nothing better than that.”

Fisher said there were no hiccups and construction went smoothly from day one.

“I couldn’t have asked for a better partnership,” Fisher said. “We had to make sure we’re building something safe, decent and affordable.”

Habitat for Humanity board member Barry Irish thanked everyone for coming and said it was a true collaboration of different units to make it happen.

The dedication wrapped up with Bruce and Liz Richardson gifting four blankets to the family from the First Congregational Church. Saber and Sabreen each got a fleece tie-blanket and Nasra and Gabait each got a quilt.

“They did a really great job,” Damin said, beaming at her new house. “It will make our dream come true.”