A man arrested Tuesday in Albert Lea on a nationwide warrant is facing charges of sexual abuse in Winnebago County.

Jamie John Kujak, 27, waived extradition to Winnebago County Wednesday afternoon in Freeborn County District Court to face three counts of third-degree sexual abuse and and one count of lascivious acts with a child. 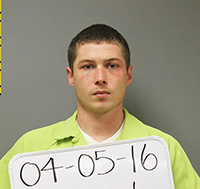 He was charged after he allegedly had sexual intercourse with a 13-year-old girl in the basement of a Lake Mills home in 2014.

Albert Lea police arrested him on the warrant Tuesday morning at 802 E. 18 1/2 St. in Albert Lea.

If convicted on three counts of third-degree sexual abuse, Kujak faces a maximum sentence of 30 years in prison and a $30,000 fine.