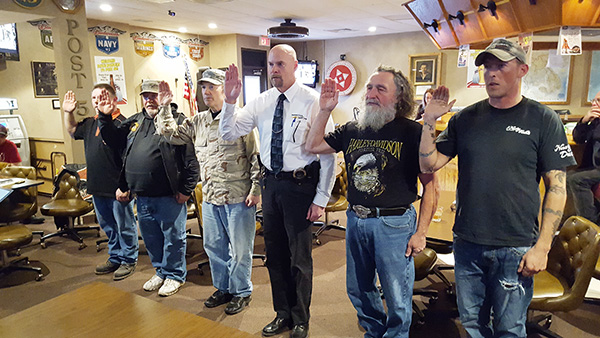 Officers for the American Legion Riders Chapter 56 were installed at a ceremony recently. – Provided

According to the organization, it has between 30 to 40 members. These men and women are from the Albert Lea, Alden, Glenville and Hartland American Legion posts, with more area posts showing interest. It doesn’t matter what American Legion post a person is a member of — as long as they are a part of the Legion family, a person can join.

The American Legion Riders was formed in fall 1993 in Garden City, Michigan, as a means to provide an atmosphere where post, auxiliary and Sons of the American Legion members who share an enthusiasm for motorcycles could come together in a family-oriented environment.

American Legion Riders chapters are well-known for their charitable work, which has raised hundreds of thousands of dollars for local children’s hospitals, schools, veterans homes, severely-wounded service members and scholarships. Since 2006, riders nationwide have participated in the Legion Legacy Run to annually raise money for the Legacy Scholarship Fund, established to provide scholarships to children of U.S. military personnel killed since 9/11.

All operators must be properly licensed and insured per state laws, and members must obey motor-vehicle laws in the state in which they are operating a motorcycle or riding as a passenger.