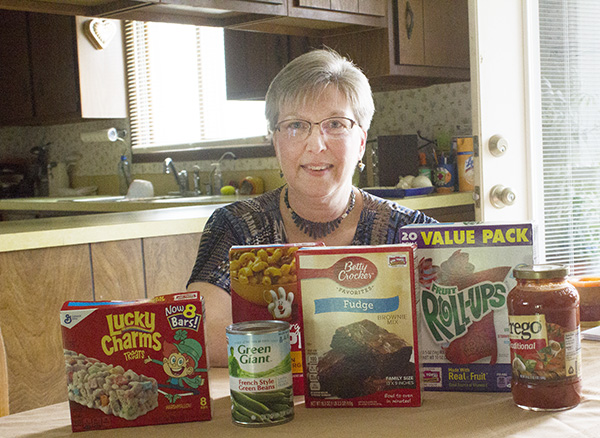 Karen Cibert has coordinated the donation of more than 300 pounds of food for Albert Lea Area Schools students so far this year. – Sam Wilmes/Albert Lea Tribune

Giving comes naturally for an Albert Lea woman, who is using her natural gift to help local students.

In the campaign’s first year, it raised $600 for pens, notebooks and backpacks for children, along with 88 pounds of snack food.

She thanked administrative assistant Heidi Skophammer for coordinating the donations within the district’s elementary schools.

After hearing from district officials how beneficial and appreciated the donations were, Cibert decided to hold the fundraiser again for the 2015-16 school year.

This year’s haul raised 325 pounds of food, with an estimated retail value of $885.

She said coordinating donations allows her to be involved in the community, noting she empathizes with children who have parents struggling with unemployment, underemployment and other difficulties.

“No matter how difficult and tough it is for me, I know it is even more difficult for other people out there,” she said.

“We do make a difference,” she said.

She said she is glad she has started donating supplies, noting she plans on continuing to coordinate the effort as long as people are willing to donate.

“I found my mission,” she said.

Livelihood: accountant for A-Best Sew and Vac and The Interchange Wine & Coffee Bistro