Building a love of cycling 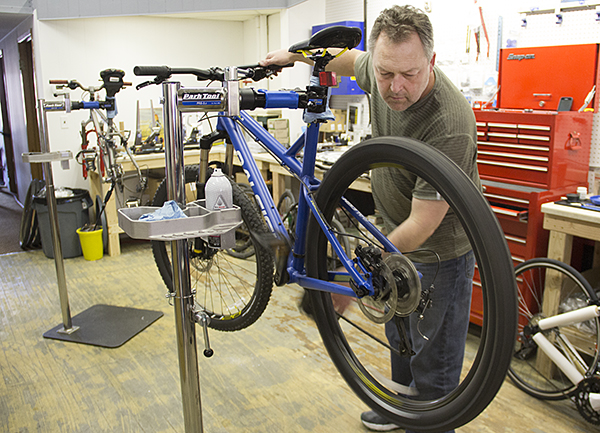 An Albert Lea man is hoping to bring a love of cycling to the community through a new bicycle store downtown.

Lestrud said he started renovating the former Tone Music store in mid-January, putting in new ceiling tiles, painting and cleaning the floor, among other improvements.

After driving around Albert Lea and looking at available building options, the Broadway location came to the top.

The store provides sales and service of bikes, along with riding accessories, parts and cycling clothing. He hopes to also provide bike rentals.

“I’ve always enjoyed riding bike,” Lestrud said. “Because I do it, I feel like I’m selling cycling. If they enjoy it, they’ll get out and use it more.”

The store provides bicycle brands such as Raleigh, Felt and Redline. There are bicycles for children and adults, along with bags and trailers for children. 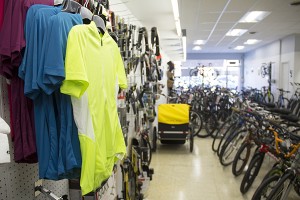 Broadway Bike Co. offers sales and service of bikes, along with cycling clothing and other accessories. – Sarah Stultz/Albert Lea Tribune

He said more items are still coming in.

So far, the business has been going well, and he said he has had many people come in for bicycle repairs.

He said he thinks people are getting more involved with riding bicycles because of opportunities to ride around Fountain Lake, on the Blazing Star Trail and on the new bike lanes on Front Street and South Broadway.

He is thankful for the support the community gives his and other downtown businesses, along with the support he has received from his neighbors.

His wife, JoDee, and children Kaled and Matti have been helping at the store, and his other son, Curi, is helping with web development.

Before opening the store, Lestrud worked at Wenger in Owatonna. His previous shop, Southside Cycling, was at 927 S. Broadway.