Coming together in times of illness 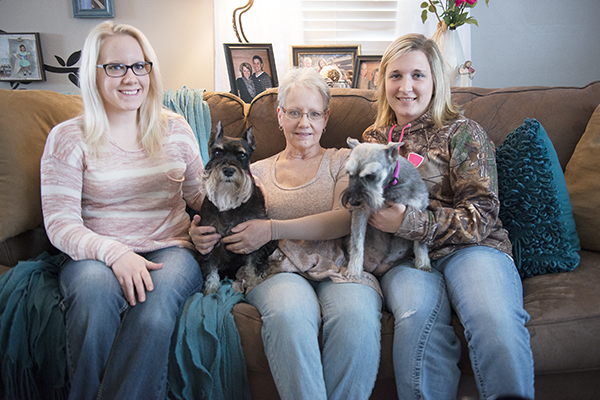 The Indrelies have always been a close family, but the challenges the family has faced over the past four years have made them even closer.

Marsha and Craig Indrelie, both born and raised in Albert Lea, met at a singles dance. They’ve now been married almost 32 years. The couple has four children: Allison, 30; Matthew, 26; Jena, 24; and Jarrod, 20; and four grandchildren. 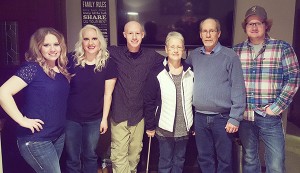 There will be a benefit for the Indrelie family on Friday in the Fairlane Building at the Freeborn County Fairgrounds. – Provided

In 2012, Craig Indrelie was diagnosed with an aortic aneurysm. The aneurysm is in a complicated spot, making it inoperable. According to his wife, Craig Indrelie was able to live with the diagnosis at first. The situation became more complicated two years ago when he developed a blood clot. Luckily, the clot didn’t go to his heart, according to Marsha Indrelie, but instead traveled to his eye. Still, the clot blew out the retina in one of Craig Indrelie’s eyes, resulting in the loss of 80 percent of its vision. Since the complications, Craig Indrelie has had to limit himself more and more, something his wife said doesn’t come easily for him.

Craig Indrelie works full-time at Streater, and works one day a week at MarketPlace Foods. He used to work at the grocery store every night, but has had to cut back with his medical complications, as his aneurysm has been changing in size recently. Marsha Indrelie said her husband has to be more careful, avoid heavy-lifting and has to limit himself. He took on his extra job in an attempt to offset medical expenses.

About a year after the family patriarch’s diagnosis, the Indrelies’ youngest daughter, Jena, started developing horrible headaches and suffering blackouts. During a track practice at Waldorf College in January 2013, Jena Indrelie passed out and went to see a doctor. She was diagnosed with a Chiari malformation — a condition in which brain tissue extends into the spine. According to Jena Indrelie’s mother, it essentially means that there’s not enough room in her skull.

Three months after Jena Indrelie was diagnosed, she underwent brain surgery. She said the procedure helped offset her symptoms for about a year, until everything came back in full force.

“Now things are worse than before the surgery,” she said.

Jena Indrelie developed occipital neuralgia from the surgery, which comes from trauma to the nerves in her neck from the surgery itself. For Jena Indrelie, it means that her headaches are worse, the vision in her right eye changes, she has problems with balance and she has a severely sensitive scalp near the base of her neck, among other issues. She had to take a break from school, and hasn’t been able to work full time because of her health issues. She’s currently seeing different neurologists who have tried different prescriptions to combat her symptoms, and there has been talk of doing a nerve block. Experts have told Jena Indrelie she is not a candidate, though, as there’s an 80-percent chance she’d suffer a stroke or go into a coma from the procedure.

The 2010 Albert Lea High School graduate was originally going to college for psychology, but said she has become more interested in nursing. Having grown up dancing with her sister through Just for Kix, she said she has been able to help instruct dancers at the Albert Lea studio. Jena Indrelie said Aimee Struck and Holly Jackson have worked with her to make it possible to teach and dance around her good days and bad days.

In January 2015, the Indrelie family was given more bad news when Marsha Indrelie went in for a routine mammogram. She was called back for a second mammogram, then a deep ultrasound. When doctors found a mass, she was sent to meet with a surgeon right away. After having a biopsy done, surgery was scheduled later that week. Originally, Marsha Indrelie assumed she would easily beat the cancer as she was diagnosed at Stage 0. Instead, the cancer came back in her lymph nodes, and it came back in a much more aggressive form.

Marsha Indrelie is currently in the middle of a 52-week regimen of chemotherapy and radiation. Her last scheduled chemo treatment will be in May. With her cancer not yet cleared and her current oncologist set to retire, Marsha Indrelie will see new doctors who will draw up a new plan of attack.

The chemo has led to the development of neuropathy in her legs from nerve damage, making it impossible for her to work. The setback has been difficult for Marsha Indrelie, as she had previously worked two jobs for the last 12 years.

After knowing what the Indrelie family has gone through and knowing the strain the family has been under financially, close family friends and the community have banded together in support.

Sam Remakel grew up with Jena Indrelie, and Marsha Indrelie considers her to be another daughter. Sam Remakel said her mother, Laurie Remakel, had asked if a benefit could be planned to help the family out with expenses. The Remakels, along with Barb Johnson and Jenni Hanna, started putting the idea together, especially after seeing how much family time Craig Indrelie misses from working two jobs.

“He misses out on a lot,” Sam Remakel said. “We thought it could help.”

The Indrelie family benefit will be on Friday in the Fairlane Building at the Freeborn County Fairgrounds. There will be a dinner and silent auction between 5 and 8 p.m., followed by a dance with Uptown Sound.

The family and the benefit’s organizers have been overwhelmed by the community support behind the event.

“People have been very generous,” Sam Remakel said. “It’s amazing how generous people are in times of need.”

“The community has been so generous,” Marsha Indrelie said. “I would never want to live in a big city. You just don’t have the closeness that you have here.”

The Indrelie family will attend the benefit, though Marsha Indrelie is not sure how long she’ll be able to stay out.

“I want to be with the people and let them know how much this means to us,” she said.