Funeral services for Dale K.  Heilman of Albert Lea will be at 11 a.m. Friday at First Lutheran Church in Albert Lea. The Rev. John Holt will officiate. Interment will be in Graceland Cemetery.  Military honors will be accorded by Freeborn County veterans organizations. Visitation will be from 5 to 7 p.m. Thursday at Bonnerup Funeral Service in Albert Lea and one hour prior to the service at the church. 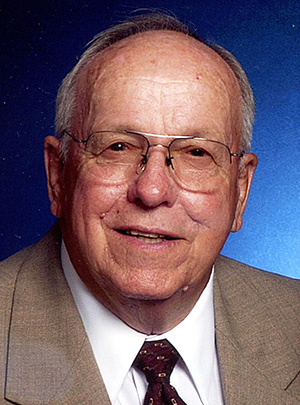 He was born on March 2, 1927, in Albert Lea, the son of Charles G. and Dolores (Bosacker) Heilman. He graduated from Albert Lea High School and then proudly served his country in the U.S. Navy as a seaman from March 1945 until his honorable discharge in July 1946. Dale returned to Albert Lea, began working at Wilson & Co., drove school bus and then worked for Standard Oil.

He was united in marriage to Donna Hanson on June 13, 1948, at Hayward Lutheran Church. They shared 67 years of marriage and were blessed with four children, Dann, Dara, Doug and Dede.

In 1965, Dale started Heilman Oil and then opened Eastside 66, which was one of many service stations he opened in the area. He worked six days a week, but Sundays were centered on his faith and family. When reflecting on Dale’s life, one cannot help but notice how service-centered he was. In his work he was always loyal and faithful to his customers with his ever -resent positive attitude. He led by example when encouraging others to be engaged and involved in the community. He took an active role in many areas at First Lutheran Church, the Y’s Men’s Club, Meals on Wheels and enjoyed being a part of the American Legion and Elks Club. He enjoyed traveling and music, but mostly just being engaged with people. His family was always the top priority.

Dale was preceded in death by his parents Charles and Dolores Heilman; father-in-law and mother-in-law Irvin and Florence Hanson; brother, Chuck Heilman, and his wife, Pat; and sister-in-law, Charlotte, and her husband, Jack Johnsrud.

Memorials are suggested to Peace and Power.