Despite bans on lead in paint, lead poisoning still a worry for children in pockets of Minn. 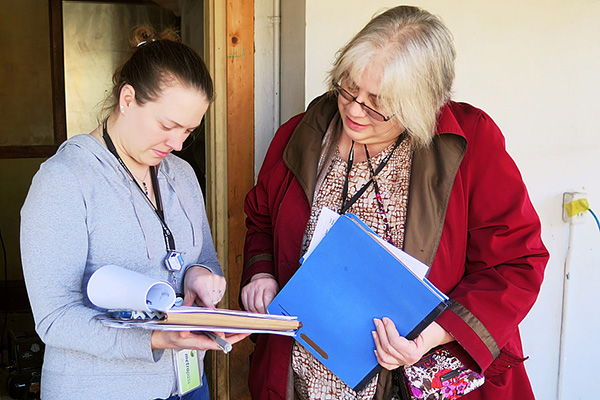 Michele Anderson, left, and Lisa Smestad review an inspection report for a north Minneapolis rental property that has lead contamination. A child in the home was poisoned by lead paint and the city of Minneapolis is using a federal HUD grant to help clean up the property. – Lorna Benson/MPR News

Bans on lead in paint and gasoline have helped drive down lead poisonings in Minnesota the past 20 years, but there are still urban neighborhoods and rural pockets where the poisoning rate among children remains stubbornly high.

Last year, 151 Minneapolis children under age 6 tested positive for elevated levels of lead in their blood. Most were due to lead homes.

Health workers will go door-to-door this weekend in the city promoting lead tests in high-risk areas identified with mapping technology. Their message: It’s easier than people realize for children and lead to still meet.

“This is a floor that’s got lead paint on it,” Lisa Smestad, the city’s home lead expert, said as she stood recently on the porch of a pre-World War II home in north Minneapolis.

Workers covered the wood floor with plywood to keep the peeling paint out of reach, but there was also paint peeling off the kitchen ceiling, in the bathroom and on the bedroom walls and windows.

Smestad’s program is tapping money from a $3.4 million HUD grant to fix the rental home after lead poisoned a young child there. But there are many more houses that need to be fixed.

Eating paint chips is a common cause of lead poisoning in children. Lead paint chips and dust are highly toxic. Exposure during childhood can cause developmental delays, behavior problems and sometimes death.

Lead was used to enhance paint colors and make the product more durable. Before it was banned in 1978, lead-based paint was often used on high traffic areas such as porches, kitchens, doors and window trim. It’s easy to spot lead in old paint. When it breaks down, it cracks in distinctive squares and rectangles, referred to as alligatoring by the paint industry.

An estimated 80 percent of the houses built before 1950 have lead paint in them. As long as the paint is maintained or covered with a new coat of paint, it usually doesn’t pose a significant risk.

But in Minneapolis, there are poor neighborhoods with lots of rental units where the paint is peeling and out in the open.

Back in her office, Smestad, who runs the Lead and Healthy Homes program for the Minneapolis Health Department, pulled out a stack of maps that now guide her lead prevention efforts. Last year, the city health department started mapping lead poisonings down to the individual address.

She pointed to a section of south central Minneapolis around Powderhorn Park and the Phillips neighborhood. Her map also reveals another cluster of lead poisonings in north Minneapolis in the Jordan and Hawthorne neighborhoods.

In total there are 18 city blocks that have had more than 20 child lead poisonings since 1998.

Her team this weekend will take a mobile lead testing van to a six block area in the Phillips neighborhood. Health department workers will knock on doors and encourage parents to test their children for lead.

The hope is that door-knocking proves more effective than, say advertising, as a way to warn people about lead poisoning and to find contaminated homes the feds will pay to fix.

“I think it’s great,” she said. “Tackle those first, rather than doing more broad education campaigns that might or might not reach the families that we’re really trying to get those messages to.”

Those messages also adorn signs on bus benches showing how many kids in the neighborhood have been poisoned by lead.

Eliminating lead paint risks won’t be easy, but measuring the success of the department’s efforts on some of its most affected blocks should be simple, Smestad said.

“I would like to see no more children poisoned on them.”