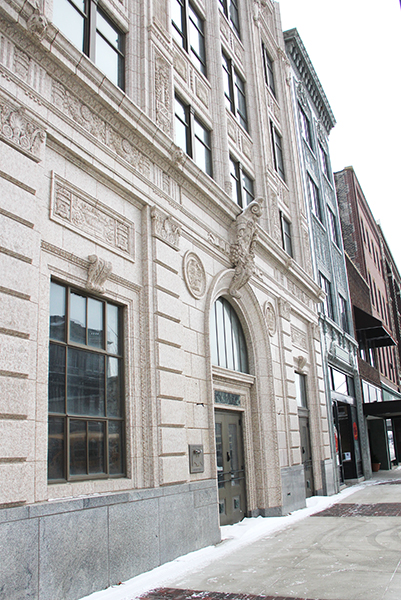 The Freeborn National Bank Building and Jacobson Apartment buildings were renovated on the exterior in 2007. –
Sarah Stultz/Albert Lea Tribune

The agreement allows Cohen-Esrey to develop financing options for the development of the buildings.

City staff will develop the agreement within the next couple City Council meetings that will allow Cohen-Esrey to have exclusive rights to the project.

The city was previously in a development agreement with the company for two years until city officials wanted to see if there was any other interest for redevelopment. Cohen-Esrey had twice applied unsuccessfully for about $379,000 in housing tax credits and deferred loans for $457,000 from the Minnesota Housing Finance Agency. The project proposal hinged on the awarding of the housing credits to ease the cost of development.

A second developer, made up of different entities, also showed interest, but the city ultimately chose to pursue Cohen-Esrey a second time.

Tom Anderson, managing director of Cohen-Esrey Affordable Partners, the affordable housing branch of Cohen-Esrey, said the company is optimistic of its chances to secure low-income tax credits, but knows securing them is a competitive process.

Albert Lea City Manager Chad Adams said housing units are still planned for the second, third and fourth floor of the two buildings, and the Albert Lea Art Center and The Interchange Wine & Coffee Bistro are planned for the ground level.

He said the two buildings are beautiful and deserve to be put into use by the community.

“This project has just really captured our imagination, and we are committed to making sure it happens,” Anderson said.

He said the development will address the area’s lack of workforce housing.

The group needs to secure tax credits this fall to be able to move forward with the plan.

Applications for the next round of low-income tax credits need to be submitted by mid-June.

He said if the tax credits are secured, construction work is expected to begin in spring or summer 2017, with occupancy in early 2018.

Adams said Cohen-Esrey has been a very good partner with the city over the last few years, noting the group has a lot of experience with working with these projects.

He said it typically takes two or three years to secure tax credits for projects, and he thinks this year is the best chance so far for tax credits to be secured.

Built in 1922, the Freeborn National Bank was originally constructed as a bank on the first floor and medical and professional offices in the upper floors. The Jacobson’s first two floors were constructed in 1888, and the two upper floors were added in 1923. The buildings share a staircase and elevator.

In 2007, the city spent about $2 million to restore the exterior of the bank building, including tuckpointing, a new roof, a skylight and new water, sewer and electrical service to the buildings, among other improvements. Inside, crews have cleaned out asbestos, filled in the basement and taken out a majority of the plumbing.

Cohen-Esrey would have to replace electrical, plumbing and heating, air conditioning, among other improvements.

In other news, the council:

Directed staff to write a letter to Minnesota Energy Resources regarding concerns over the effects a possible rate increase will have on the city of Albert Lea and its citizens, Minnesota Energy Resources has proposed a 5.4 percent rate increase. Adams said the increase could spell much larger increases for some small businesses. The issue will come before the Minnesota Public Utilities Commission. Adams said the average bill would increase $12 per month.

Awarded a contract for a main elevator replacement at City Hall to Otis Elevator Co. of Rochester for about $180,000.

Approved acquisition of 1761 Pride Lane in Tiger Hills. In 2015, the city placed a hold on tax forfeiture parcels in Tiger Hills to allow for future sale and development of homes. The city has been contacted by a private party interested in purchasing the parcel. The resolution requested Freeborn County to place a value on the parcel before the city buys it and sells it to a private party.

Directed city staff and Park Board Commission to continue working on the implementation of a monarch flower park in Albert Lea.

Organizer Carol Lang presented her request for a monarch park east of the new pavilion in Edgewater Park and said it would be beneficial to monarchs. The land for the park would be donated by the city. The idea still has to go through the commission for final location selection. Lang hopes the location will allow people of all ages to learn why pollinators need to be saved. She hopes to also work with the Department of Natural Resources.

She said the area will be mowed this summer. She and others hope to begin planting the park in late May or early June 2017. Lang expects it to take two to three years for it to be in bloom for insects and pollinators. The project is expected to cost $3,000 to $4,000.