Funeral services for Dorothy Barbara Beck will be at 10:30 a.m. Friday at Concordia Lutheran Church of Pickerel Lake. The Rev. Wendy Anderson will officiate. Visitation will be from 5 to 8 p.m. Thursday at Bonnerup Funeral Service in Albert Lea, as well as one hour prior to the service at church.Burial will take place in the church cemetery. 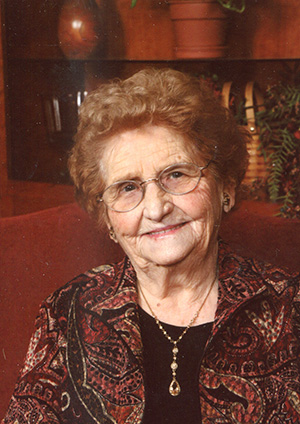 Dorothy Beck passed away peacefully Sunday, April 17, 2016, at Mayo Clinic Health System in Albert Lea with her family by her side.

Dorothy was born on July 18, 1918, to John and Anna (Wacholz) Vogel. She was baptized, confirmed and married in the former St. Paul’s Lutheran Church in Kiester. She attended school district No. 85 in rural Kiester.

She was united in marriage to Edwin Beck on May 24, 1940. They lived on a farm just east of Conger. After retiring they moved to Conger in 1979.

She was a homemaker and found enjoyment working with her flowers, playing cards, embroidering and baking.  Her greatest love was her family, grandchildren and great-grandchildren who gave her much love and joy.  She was a member of Pickerel Lake Lutheran Church and active in Women of the Evangelical Lutheran Church Association, Miriam Circle and Conger Senior Citizens.

She will be sadly missed by her family and friends.