Gun control gets hearing at state 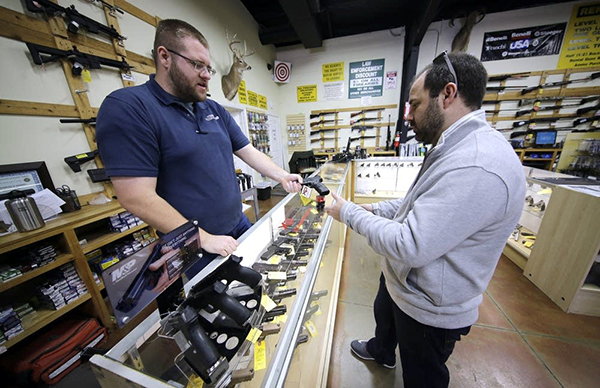 Minnesota lawmakers held a hearing for gun control measures on Tuesday, but the two bills aren’t going anywhere this session. Pictured, a man shops for a handgun in Spring, Texas. – David J. Phillip/AP

Minnesotans on both sides of the gun control debate packed a legislative hearing Tuesday to have their say on two bills that aren’t going anywhere this session.

One bill would require criminal background checks on all gun sales. The other is related to protective court orders. No votes were taken, and that led some opponents of the bills to suggest the informational hearing was more about politics than policy.

“If you went to the airport and only 60 percent of the passengers went through security screening and the other 40 percent were allowed to go straight onto the airplane, would you be comfortable getting onto the airplane?” he asked. “That’s what Minnesota’s gun purchase background check law is right now.”

Latz said his intent was to have an informed, honest discussion of his bills, even though no votes were planned. He noted the policy deadline had passed and there are no companion bills in the Republican-controlled House.

Supporters and opponents, however, spent more than two and a half hours testifying.

They included bill supporter Rachel Joseph of Minneapolis, who told lawmakers the woman who shot and killed her aunt 12 years ago bought the gun at a gun show, without a background check.

“Being here today is the best way I know to honor the incredible aunt that was taken away from me unnecessarily and make sure something positive comes from this horrible tragedy,” she said.

“You will see thousands of guns that are being sold on the internet in the state of Minnesota,” Choi said. “Many of those advertisements and what’s being promoted is that they’re not being subject to a background check.”

Gun rights advocates spoke against the bill and disputed many of the statistics used by its supporters.

Most criminals obtain their guns from other criminals, said Andrew Rothman of the Minnesota Gun Owners Civil Rights Alliance.

“They are stolen. They are straw purchased. They are traded. They are lent. They are rented,” he said. “Crime guns will be rented out by one criminal to many, many other criminals.”

Rothman and other opponents also warned that bill would move the state closer to a gun owner registry.

“It’s merely political theater designed to convince voters that something, anything is being done to reduce gun crime, when the facts prove it does not and it will not,” he said.

The absence of a vote had one Republican committee member also questioning the DFL sponsor’s political motives. Sen. Warren Limmer, R-Maple Grove, described the hearing as “political mumbo jumbo” to get an issue “spiked up” for the election.

“There might be the crass attempt just to raise money off of this issue from a variety of people that think there’s really something that’s going to pass when in reality, it’s just a means to get the issue a little more attention so fundraising activities can begin in earnest,” Limmer said.

Latz said gun control is an unavoidable campaign issue that will shake out district by district this fall.

“I don’t think it’s a partisan issue,” he said. “I think you would find bipartisan support and bipartisan opposition. But if members are polling their own districts on this issue, I think they’d find their citizens support this proposal, both of them.”