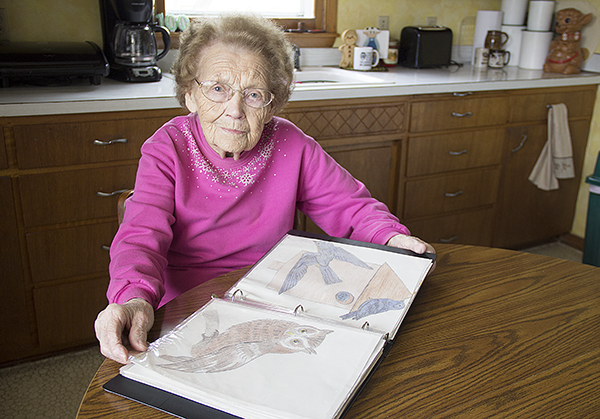 GLENVILLE — Ask rural Glenville resident Florence Palmer what she did to reach 100, and she’ll tell you she likes to stay busy.

“I hate to just sit around,” she said.

Palmer celebrated her 100th birthday earlier this month over a 2 1/2-week span with family and friends.

“They said I was going to get tired, but I never had so much fun,” she said of all of the festivities.

Palmer was born April 4, 1916, at home to Louis and Elsie Sanderson. Her father delivered her and was thrilled to have a baby girl after three boys, she said. As a child, she was introduced to the farming lifestyle.

When she was old enough to go to school, she attended District No. 5 through the eighth grade over the border a couple miles into Iowa.

On Feb. 12, 1938, she married her husband, Lynn Palmer, at the Methodist parsonage in Northwood, and they had one daughter, Donna.

The centenarian said for most of her life she was busy on the family’s farm. She became a widow in the 1960s after her husband died at the age of 47 from a heart attack, but that didn’t stop her from living life to the fullest.

“I had no idea I was going to live to be this old, but you just live on,” Palmer said, noting that others in her family did not live as long.

Though Palmer admits she has eaten a lot of sugar over her lifetime — she loves sweets — she has worked hard as well, mostly in farming, which has helped her stay balanced.

Throughout her life, Palmer’s daughter, Donna, said she has learned patience and kindness from her mother.

“She’s very kind to everybody and very patient,” the daughter said.

“There’s some good in everybody,” the mother added.

Palmer said she has lived within a three-mile radius of her present home her entire life.

She attends Round Prairie Lutheran Church and over the years has taught Sunday school, been a part of ladies aid and other circles, and has been church secretary and treasurer.

She is the oldest member at the 150-year-old church.

With all of the changes she has seen in society over her lifetime, she wonders how much in life will change in the next 100 years.

“It’s all changed so much,” she said.