Not guilty plea in home invasion 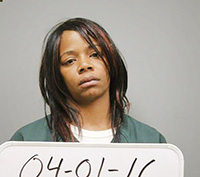 Benita Nicole Crum, 33, pleaded not guilty to one count of first-degree burglary and two counts of fifth-degree assault in front of District Court Judge Steven Schwab.

According to court documents, officers were dispatched to 610 Ruble Ave. on March 31 on a report that someone had kidnapped two children at gunpoint.

Crum is reportedly the mother of the two children.The dispute was over child custody.

The alleged victim said he heard someone downstairs on his porch. He reportedly opened up the door and found Jessie Crum, Benita Crum’s brother.

He claimed Jessie Crum put a gun to his abdomen and threatened him.

Officers determined the father of the two children may have picked up the children from school in Rochester and brought them to Albert Lea. The children were reportedly living with Crum’s mother in Rochester.

Crum said she had spoken with Rochester police who told her she could take her children back.

The children were later found and taken into protective custody.

Jessie Crum was arrested April 2 in Olmsted County on warrants and on probable cause tied to the case. Charges have not yet been filed against him, according to the Freeborn County Attorney’s Office.