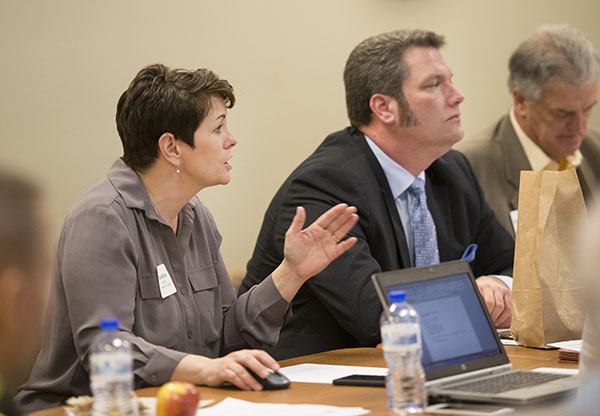 Metropolitan areas are committed to helping increase transportation funding for Greater Minnesota, including Freeborn and Mower counties, according to a Hennepin County commissioner Friday afternoon.

Peter McLaughlin made the comment at a roundtable discussion that included more than 25 southern Minnesota county commissioners, city councilors, mayors, and county and city engineers at the Freeborn County highway building in Albert Lea. 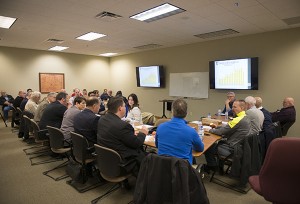 He said increased transportation funding has been identified from county leaders across the state as a major concern, and he hopes a federal transportation agreement reached last year will spark state action.

The event, hosted by Freeborn County 4th District Commissioner Chris Shoff — the past president of the Association of Minnesota Counties — was meant to discuss local and statewide transportation funding needs.

Differences were presented on how to pay for an increase in transportation funding.

District 27A Rep. Peggy Bennett, R-Albert Lea, said a majority of the people she has talked to do not want the gas tax raised because of the state’s surplus and tax structure. She said she believes raising the tax will make the state less competitive with Iowa.

Reinartz said although a plan will not solve all of the county’s transportation funding issues, he believes it will put a significant dent in it.

The Mower County Board of Commissioners is considering a half-cent sales tax to address the transportation funding shortfall. Mower County needs roughly $100 million for road and bridge projects over the next decade.

Freeborn County Engineer Sue Miller presented how Freeborn County has addressed its $6 million yearly funding deficit, with the passage of a wheelage tax in 2013 and a half-cent sales tax last summer.

She said those taxes have not been enough to eliminate the deficit, noting that more than 100 miles of paved Freeborn County highways in the next 10 years will be in need of funding.

Shoff said increasing transportation funding is essential for the movement of goods, the area’s farm economy and public safety.

He said in a press release that fixing and maintaining roads and bridges is a key function of government.

“In order to address our needs, we need a funding solution from the Legislature that will help us keep our roadways safe for the public, provide durable infrastructure for Minnesota’s harsh winter and facilitate commerce so that our network of roads invites economic activity and job growth,” Shoff said.

McLaughlin said in a press release the whole state needs to work together to pass a transportation package.

“In the past, when we’ve succeeded, we’ve done so by working together across the state,” he said. “That’s what we need to do again this year. We acknowledge that all communities in Minnesota have unique needs relating to roads, bridges and transit (buses and trains). By uniting together as counties and urging the Legislature to pass a sustainable package, we can rebuild our transportation infrastructure so no community is left behind.”