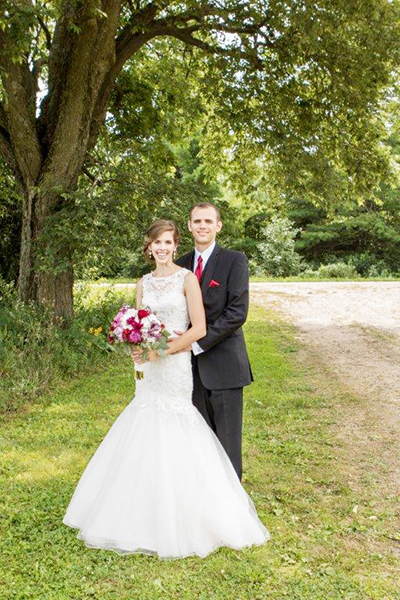 Allyssa Danielle Sorenson and Brian Royce Tomlinson were married at 3:30 p.m. Aug. 22, 2015, at Three Oaks Vineyard in Albert Lea. The Rev. Joshua Enderson officiated. A wine reception followed after the ceremony, which was then followed by a dinner reception at Diamond Jo Casino.

Ring bearers were Christian Cords and Max Mauloff, cousins of the bride.

Ushers were Cole Sorenson, brother of the bride; and Joshua Cords, cousin-in-law of the bride.

Reader was Ashley Steward, friend of the bride.

Host and hostess were Julie Soreson, godparent of the bride; and Tim Lenhardt, friend of the couple.

The groom is the son of Bonnie and James Tomlinson of Rochester, and the grandson of Geraldine and Winfred Tomlinson and Shirley Willoughby and the late Byron Willoughby. He is a 2009 graduate of Cypress Creek High School in Orlando, Florida, and a 2013 graduate of St. Olaf College, where he received a degree in psychology. He is employed as a digital analyst for Marketing Architects in Minnetonka.

The couple honeymooned in Door County, Wisconsin, and will reside in St. Louis Park.