St. Theodore is gearing up for its largest fundraiser of the year 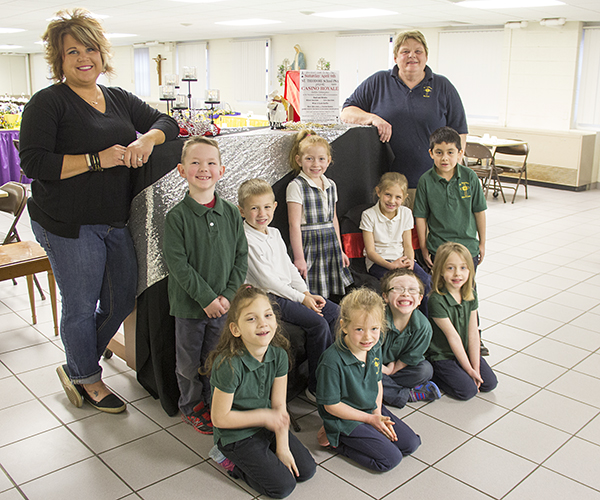 Melissa Wittmer and Jolene Dillemuth, organizers for the upcoming St. Theodore Catholic School auction extravaganza pose with some of the decorations for the event with Mary Tuohy’s kindergarten class at the school. -Sarah Stultz/Albert Lea Tribune

The parent student association at St. Theodore Catholic School is gearing up for the school’s largest fundraiser of the year.

The St. Theodore auction, themed Casino Royale, will begin at 6 p.m. Saturday in Marian Hall and the gymnasium at the school.

Melissa Wittmer, co-chairwoman of the event, said in the past the auction and dinner have been held at another facility in town, but this year, the organizing committee decided to bring the activities back in-house to try to raise more funds.

The event will incorporate some fun ideas from year’s past, as well as some new events, too.

In addition to food — including six different food tables and a full bar — there will be a silent auction, a live auction, a cash raffle and a wine auction, along with some casino-style games. People will be able to gamble with St. Theo bucks to win chances for large prizes.

Wittmer — who has two children at the school and has been co-chairing the event with her husband, Dan, for five or six years — said Jolene Dillemuth, a St. Theodore Catholic School employee who worked in the restaurant and hotel industry for more than 30 years, will head up the food. There will be a carving station for meat, along with food donated from various businesses, including Mrs. Gerry’s Kitchen and Hy-Vee, to name a few.

Some of the auction items include a gourmet catered-in meal, sporting events tickets, a package including a hotel stay in Duluth, among others. 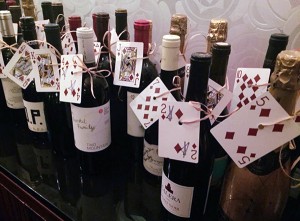 There will be casino-style games at this year’s event to correspond with the Casino Royale theme. -Provided

Krieger Beverage and Schipp’s Pro Power Wash each donated $500 for a cash raffle this year. Up to 1,000 raffle tickets will be sold for $5 each, and the money raised from the sale of the tickets will go directly back to the school. The donated money from Krieger Beverage and Schipp’s Pro Power Wash will be given out as prizes. Raffle ticket prizes include one for $500 in cash, one for $300 in cash and two for $100.

Raffle tickets are available at the school or parish offices.

Wittmer said in the past the event has raised about $23,000 to $25,000. The money goes toward operations for the school.

“We want to promote it to new people who haven’t come,” she said. “It’s a great event. When you raise that type of money in a four-hour span, it’s fun.”

People are encouraged to buy their tickets for the event ahead of time, though tickets will also be available at the door. Cost is $30, which includes the price of the meal.

“It’s all about making the most money for the school and trying to figure out the best way to do that,” Wittmer said.

Where: Marian Hall and gymnasium at St. Theodore Catholic Church