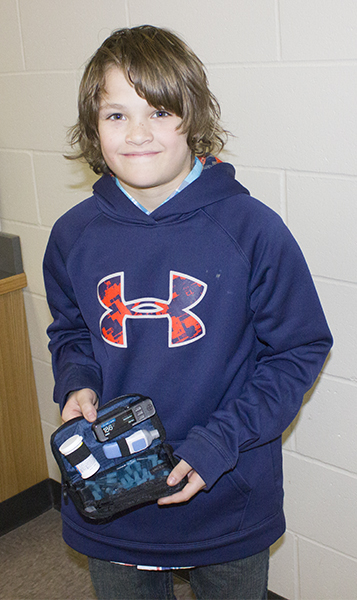 The fundraiser was held for 9-year-old Byron Getchell, a Type 1 diabetic, who has recently developed hypoglycemic unawareness, a condition that means he is no longer able to feel when his glucose levels are dangerously low.

Getchell’s glucose levels have dipped into the 30s at times, placing him at risk for seizures, coma and even death. Normal levels for someone his age range from 70 to 150, according to his mother, Dara Getchell on his GoFundMe page.

Proceeds from the fundraiser will go toward a blood glucose sensor that will continually monitor his blood glucose levels and the cost for six months of replacement sensors.

Money will also go toward acquiring a trained service dog that will alert someone when his sugar levels are low.

As of Sunday afternoon, a GoFundMe account for Getchell had raised more than $6,700 of the $11,000 the family is looking to raise for the sensor and the service dog. This did not include the school’s fundraiser.

The third-grader said he was thankful for the school’s support and it made him feel good to have people help him.

Getchell was diagnosed with Type 1 diabetes around his fifth birthday.

After the family’s doctor ran a series of tests, he was transported to St. Marys Hospital in Rochester, where he was diagnosed.

The boy cannot eat without checking his blood sugar. If his blood sugar level is high, he has to inject insulin to bring the level back within normal limits.

Once his blood sugar level is back to normal, he has to track his carbohydrate intake to ensure he receives enough insulin.

Because of his Type 1 diabetes, he gets seriously ill more often than normal.

Despite his everyday struggle to remain healthy, the boy’s mother said her son maintains a selfless personality, according to his GoFundMe page.

“Byron has a very soft heart and is always thinking of others before himself,” she said.

She said he likes to save money, go to the store and buy things for his six siblings.

“We have great joy as Byron’s parents and continue to be amazed by his compassion and drive each and every day,” she said.

The boy  wants to be a carpenter, like his father, when he grows up.