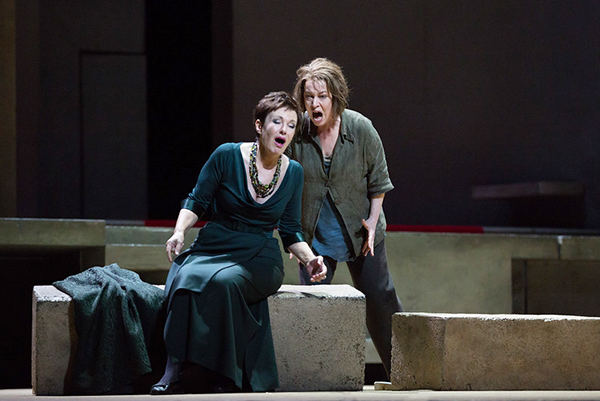 The season finale of the Metropolitan Opera Live in HD will be on Saturday with a transmission of Richard Strauss’ “Elektra.”

“Elektra” has been staged 101 times at The Met since it premiered there in 1932. It was adapted by Hugo von Hofmannsthal from his 1901 drama “Elektra.”

According to a news release, “Elektra” is a “musically complex work which requires great stamina to perform.” It states the role of Elektra, particularly, is one of the most demanding in the dramatic soprano repertoire.

Though the opera is based on ancient Greek mythology, it is highly modernist and expressionist.

The story focuses on Elektra and her emotions and psychology as she meets with other characters.

Nina Stemme sings in the title role, with Waltraud Meier as Elektra’s mother and Adrianne Pieczonka as her sister, Chrysothemis. German tenor Burkhard Ulrich will make his Met debut as Aegisth, the mother’s lover.

The opera runs about two hours.

Tickets are $20 for adults, and there are free student tickets with the showing of a current student ID.

The following is a roundup of other events taking place this weekend:

• A benefit for the Indrelie family will be from 5 to 8 p.m. at the Fairlane Buildign at the Freeborn County Fairgrounds.

Hometown Pride Cleanup Day will be from 9 a.m. to noon at the Albert Lea transfer station. People will be able to dispose of items at free or reduced rates.

Glenville United Methodist Church will host its annual salad luncheon from 11 a.m. to 1 p.m. Cost is $6.

The Trader Jack’s Sports Cards & Collectibles Show will be at the Northbridge Mall. Show includes football, baseball, hockey and wrestling cards. There will be other sports memorabilia, including autographs, mugs, glasses and tents.

A cancer benefit for Rella Loyd will be from 3 to 7 p.m. at Emmons Lutheran Church in Emmons.

Loyd was diagnosed with lung cancer that spread throughout her body in December 2014. She takes chemotherapy and radiation treatments at Mayo Clinic Health Systems in Rochester and Albert Lea.

• A screening of “What Happened Last Night” will be at 4 and 7 p.m. at the Marion Ross Performing Arts Center.

The film is being distributed nationwide and worldwide later this year.

The film sold out in New York at the screenings earlier this month.

Tickets are $10 and will be available at the door or online at www.eventbright.com.

• The Gordy & Debbie Show, featuring country, ’50s and ’60s, comedy, patriotic and gospel music, will take place at 7 p.m. at the Albert Lea High School auditorium. The event is a fundraiser for the Freeborn County Historical Museum.

Tickets are $15 each or $25 for two. Tickets are available at the Freeborn County Historical Museum and the Convention and Visitors Bureau.

• A pancake breakfast, featuring Denny Brue’s famous pancakes, will be from 8 a.m. to 1 p.m. at the Fairlane Building at the Freeborn County Fairgrounds. Breakfast includes sausage, eggs, juice and coffee. Donations will be accepted.