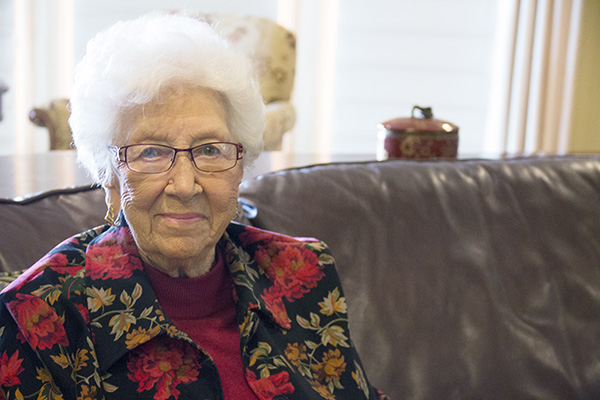 A Freeborn County woman will celebrate a major milestone later this month as she turns 100 years old.

When asked what her secrets were for reaching 100, Dorothy Cafourek said she worked hard on her and her husband’s farm, but she ate whatever she wanted to.

Cafourek, who lives south of Albert Lea, still drives her 2002 Ford Taurus to and from Albert Lea and Glenville.

“I’m not scared of my driving,” she said with a laugh. “It’s that other guy.”

Born on April 16, 1916, on a farm near the small Freeborn County community of London, she attended School District 51 through eighth grade, and in 1934 she married her husband, Milo.

When they got married, it was in the middle of the Great Depression. She said they farmed with horses and didn’t have a tractor until 1938. At the height of their careers, they farmed 240 acres.

In 1948, they got indoor plumbing and eventually they owned a radio and television. They had four children.

In 1974, the couple moved to Glenville, and from there they spent 20 winters in Texas, making many new friends and neighbors over the years.

Her husband died in 2003 at the age of 89, and about three years ago, Cafourek moved into an attached apartment next to her son, Ken, and his wife’s home, south of Albert Lea.

The soon-to-be centenarian has never been in a nursing home.

She recalled spending time dancing twice a week in Austin and at Brick Hall in her  younger years.

An avid sports fan, she said she attended several Twins games into her 90s and has had her picture taken with Bert Blyleven.

She said other than getting a knee replacement 27 years ago, breaking her hip four years ago and having a pacemaker put in, she has been relatively healthy without any major problems.

Cafourek said when she was younger, she used to play in a women’s softball league.

Her daughter Sandy Steene described her mother as an outgoing and giving woman who is proud of her family.

Livelihood: Cafourek and her husband retired as farmers after 40 years in the industry.

Interesting fact: Some of Cafourek’s favorite hobbies of the past include canning and making kolache.