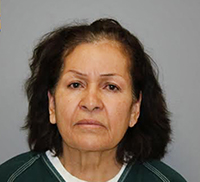 Nunez-Arenas de Garcia was in the right-hand passenger side of a vehicle that contained three packages with a total of 8.5 pounds of cocaine in September 2014 on a traffic stop near the overpass bridge on Interstate 90.

Court documents state a Minnesota State Patrol trooper initially pulled over the vehicle because it did not have a rear license plate light on.

Rogelio Rocha, also of Tolleson, was the driver and was found to have an Arizona driver’s license. The vehicle was registered in Minnesota but had a license plate registration sighting on Interstate 40 in Arizona that same month.

A search of the vehicle with a dog reportedly alerted to the odor of drugs from the car near the front passenger-side quarter panel and front bumper.

The trooper found two packages behind the glove box and near the front quarter panel. The third package was under the center console of the driver’s side.

Eliel Garcia of Bloomington and Jose Luis Ramirez of Phoenix were also charged in connection with the incident.

Ramirez still faces one count of first-degree possession of a controlled substance.

According to the Freeborn County Attorney’s Office, charges have been dismissed against Rocha and Garcia.

A pre-sentence investigation was ordered for Nunez-Arenas de Garcia.

Aiding an offender to avoid arrest carries a maximum sentence of three years in prison and a $5,000 fine.