An Albert Lea man who pleaded guilty last year to second-degree assault was placed on probation for up to seven years Thursday in Freeborn County District Court. 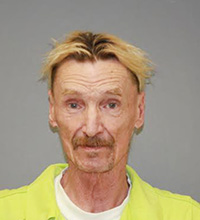 Eddie Alvin Hopper, 64, was sentenced after pleading guilty in June 2015.

Hopper was given a stayed sentence of more than two years in prison.

He was sentenced to 30 days in jail — and given credit for 30 days served.

Hopper reportedly slashed a man in the face with a knife on Aug. 23, 2013, at The Nasty Habit bar.

Court documents state upon arrival, officers found the victim being treated by paramedics and  bleeding with a cut just above the corner of his mouth.

The victim told police Hopper was acting aggressively and started threatening to kill people, according to court documents. The man stated Hopper threatened him, pulled out a knife and attempted to slash toward him.

The victim alleged that after he attempted to punch Hopper, Hopper swung the knife and cut his face.

After being interviewed and booked, Hopper reportedly claimed he did not stab the victim, but noted he believed his face might have hit his belt. Court documents state Hopper claimed he should not be in trouble for defending himself against an attack.