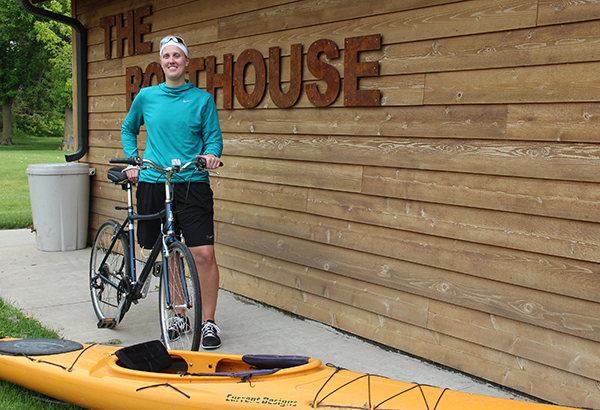 An Albert Lea High School physical education teacher and coach is hoping to show her students she practices what she preaches on Saturday at a triathlon in Albert Lea.

This year’s race will start and transition at the Brookside Boat Landing. Participants will begin with a 1.5-mile paddle on the channel and Bancroft Bay. Then, racers will then transition to a nine-mile bike ride through the Albert Lea countryside, before finishing with a 3.1-mile run around part of Fountain Lake.

The event will be locally timed.

Klennert, who is finishing her third year in the school district, said she has been running and lifting in preparation of the event.

“I treat this as a prep race for the half marathon,” said Klennert, who is preparing for Grandma’s half marathon in about a month.

She hopes some of the high school athletes will join her in the event and said she appreciates that there is an event like this locally.

Lynn Rothmeier, who is on the organizing committee for the event, said organizers shortened the route this year, in hopes of making it more of a family event. Canoes, kayaks, paddles and life jackets will be available for use through the Brookside Boathouse. Participants must have their own bikes and helmets.

Cost is $30 for an individual or $20 per person for a relay team. Teams can have a minimum of two people and a maximum of four people.

Children 14 and under must be accompanied by an adult.

The fee includes a T-shirt, a meal ticket to the 112 on Broadway and a canoe or kayak rental.

Deadline to register online at www.altriathlon.com is Thursday. Registration will also be accepted at packet pickup from 5 to 8 p.m. Friday at Country Inn & Suites and from 7 to 8:30 a.m. Saturday at the Brookside Boat Landing.

A $250 prize will be awarded to the first-place youth group organization to participate.

All proceeds go to support the Albert Lea splash pad.

What: Land Between the Lakes Paddle, Pedal, Run